To Sanctify the World

The Vital Legacy of Vatican II 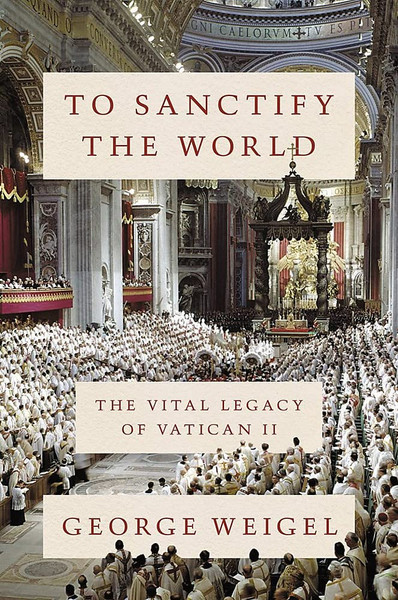 To Sanctify the World

The Second Vatican Council (1962–1965) was the most important Catholic event in the past five hundred years. Yet sixty years after its opening on October 11, 1962, its meaning remains sharply contested and its promise unfulfilled.

In To Sanctify the World, George Weigel explains the necessity of Vatican II and explores the continuing relevance of its teaching in a world seeking a deeper experience of freedom than personal willfulness. The Council’s texts are also a critical resource for the Catholic Church as it lives out its original, Christ-centered evangelical purpose.

Written with insight and verve, To Sanctify the World recovers the true meaning of Vatican II as the template for a Catholicism that can propose a path toward genuine human dignity and social solidarity.

“Superb… an accurate understanding of the council has value to persons well beyond the borders of the church. And that’s why To Sanctify the World is so important.”
―National Review

“Weigel delivers a probing study of the figures and theologies that influenced Catholic policy… there is much valuable work in this fluid reevaluation of Vatican II’s origins and impact.”
―Publishers Weekly

“In explaining why Vatican II was necessary and what it taught, George Weigel has given us a rich history of the Catholic Church’s efforts to meet the challenges of modernity. Viewed in their intellectual, social, and political context, the personalities, debates, and documents of that momentous event emerge with new clarity in this remarkable work. Meticulously documented, yet eminently readable, To Sanctify the World is a matchless guide to the meaning and import of the Second Vatican Council.”
―Mary Ann Glendon, Author, A World Made New

“Historians tell us that the genuine interpretation of an Ecumenical Council’s teaching usually at least takes sixty years to settle. That means we are now at the point of serenely and sanely understanding the authentic magisterium of Vatican Council II. And count on Weigel to provide an attractive and compelling synthesis of it.”
―Timothy Cardinal Dolan, Archbishop of New York

“In this book, Weigel gives a masterful interpretation of the Second Vatican Council that could not come at a better time for seminarians, theologians, pastors, and all who seek to understand its documents. He provides important keys for understanding the legacy of Vatican II, helping us through the contemporary debates about the Council. Weigel’s engaging book is a watershed in studies of Vatican II.”
―Eduardo J. Echeverria, Sacred Heart Major Seminary

“Anyone interested in a bold, yet authentic interpretation of Vatican II should read this book, in which George Weigel persuasively demonstrates that the Council—the Holy Spirit’s greatest gift to Catholicism in the twentieth century—was not so much about reinventing and ‘modernizing’ the Church as Christifying and converting the world.”
―Robert Barron, Bishop of Winona-Rochester; Founder, Word on Fire Catholic Ministries

“All of Weigel’s best qualities are displayed here—penetrating intelligence, erudition, clarity, breadth of vision, remarkable range of insider’s knowledge. I doubt that Vatican II—still bitterly contested in some quarters sixty years after the event—will ever be more interestingly or more accurately understood than in this deeply moving book.”
―Lance Morrow, Author, God and Mammon

“In a time of widespread Christological amnesia and even denial, Weigel’s new book offers a bracing remedy. He provides a magisterial recovery of the Christological vision and commitment that permeate the documents of the Second Vatican Council and that illuminate the Church’s way forward. It is the way toward the sanctification of the world through living and sharing faith in Jesus Christ, who is the true joy of the Gospel.”
―Robert Imbelli, Author, Rekindling the Christic Imagination

Heart of the World

Joy to the World