How I Helped the Sexual Revolution Hijack the Women's Movement 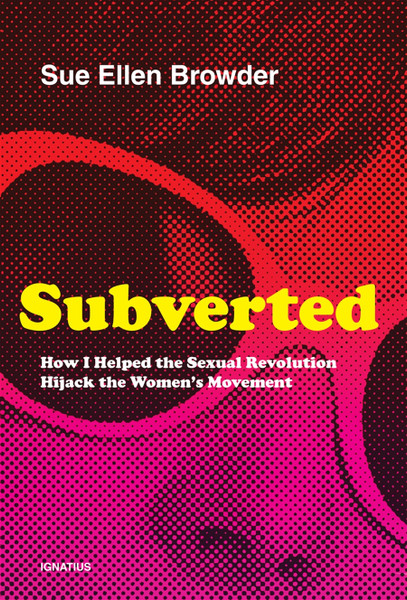 Contraception and abortion were not originally part of the 1960s women's movement. How did the women's movement, which fought for equal opportunity for women in education and the workplace, and the sexual revolution, which reduced women to ambitious sex objects, become so united?

In Subverted, Sue Ellen Browder documents for the first time how it all happened, in her own life and in the life of an entire country. Trained at the University of Missouri School of Journalism to be an investigative journalist, Browder unwittingly betrayed her true calling and became a propagandist for sexual liberation. As a long-time freelance writer for Cosmopolitan magazine, she wrote pieces meant to soft-sell unmarried sex, contraception, and abortion as the single woman's path to personal fulfillment. She did not realize until much later that propagandists higher and cleverer than herself were influencing her thinking and her personal choices as they subverted the women's movement.

The thirst for truth, integrity, and justice for women that led Browder into journalism in the first place eventually led her to find forgiveness and freedom in the place she least expected to find them. Her in- depth research, her probing analysis, and her honest self-reflection set the record straight and illumine a way forward for others who have suffered from the unholy alliance between the women's movement and the sexual revolution.

Subverted offers a window into our uniquely disturbed historical era. Generations of readers will turn to Subverted when they want to know what turned the tide."
— Jennifer Roback Morse, Ph.D., Founder and President, the Ruth Institute

p>"Browder combines a compelling personal narrative with piercing observations from her work in women’s media, resulting in a book you can’t put down."
— Jennifer Fulwiler, Author, Something Other Than God p>"Subverted is a game changer for our culture, and in particular, for women."
— Abby Johnson, Author, Unplanned p>"What a romp—through the offices, the backrooms, and even the personal lives that brought you the sexual revolution!"
— Helen Alvaré, Professor of Family Law, George Mason University

"Here are two books, two stories in one. The first opens your heart, the second opens your eyes."
— Peter Kreeft, Ph.D., Professor of Philosophy, Boston College

p>"Here is the eye-opening account of how the feminist movement got hopelessly off track, and how a one-time Cosmo writer managed to find her way back to God’s reality."
— Steven Mosher, President, Population Research Institute p>"This is a courageous book!"
— Vicki Thorn, Founder, Project Rachel p>"A gripping story that uncovers the dirty secrets behind the women’s movement. A must-read for Millennials."
— Kristan Hawkins, President, Students for Life of America

"Browder’s understanding of the human person, the intrinsic need for relationship, is beautiful and deep."
— Jeanne Mancini, Director, March for Life

p>"Sue Ellen Browder is silent no more about her role in promoting a distorted feminism; you will be refreshed by her courage."
— Fr. Frank Pavone, National Director, Priests for Life

"It sounds like a cliché but I literally could not put this book down.Through her own personal experience and journalistic expertise, Sue Ellen Browder documents with vivid detail how the sexual revolution has sold women, men, and society a huge bill of goods. This book is a must read for anyone concerned about the declining state of our culture."  - Teresa Tomeo

The Blessing of Christmas (Digital)