Further Testimony from Christians Before Constantine 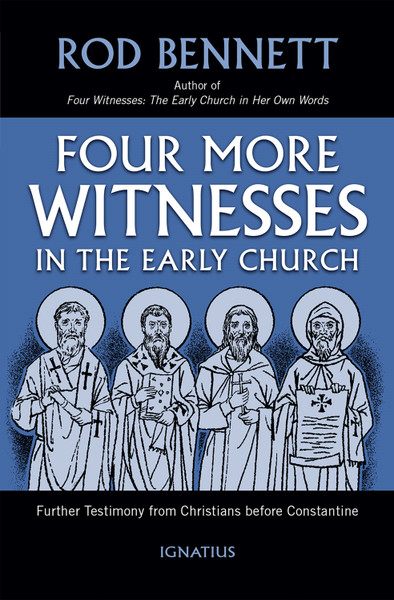 Here is the long-awaited sequel to Rod Bennett's Four Witnesses: The Early Church in Her Own Words, a page-turning spiritual adventure following the lives and words of Clement of Rome, Ignatius of Antioch, Justin Martyr, and Irenaeus of Lyons. Four More Witnesses invites readers to enter again the world of the early, influential Christian writers, this time meeting Hermas, Clement of Alexandria, Hippolytus, and Origen.

What did these witnesses have to say on the necessity of baptism? What did they think of "eternal security" and confessions to Church elders? What about Mary and her role in salvation history? Christian writers addressed all of these questions, and many more, in the decades following the Apostles—an era when even the Creed was still a work in progress.

Like Four Witnesses, Four More Witnesses is a moving chronicle of the Christian Church in the flower of her youth.

"Bennett uses the words of the Fathers themselves, but recast so that they flow like the words of a modern novel—an adventure or a mystery. Hermas, Clement, Hippolytus, Origen: you'll think of them as friends forever after reading Four More Witnesses."
— Mike Aquilina, Vice President, St. Paul Center for Biblical Theology; Author, The Fathers of the Church

"This book is a time machine taking you right back to early Christianity. You'll meet four more intriguing leaders who lived only a generation or two after the Apostles. This work is breezy, exciting, and even gripping. Bennett knows how to make history come alive. Read it, and witness the faith of our fathers."
— Brandon Vogt, Editor, ChurchFathers.org; Author, Why I Am Catholic (and You Should Be Too)

"Bennett turns a collection of ancient, somewhat foreign writings from the Church's past into an adventure of discovery and fascination. It's filled with insights about these ancient Christian witnesses and why it is important to know them. I highly recommend this book."
— Gary Michuta, Author, Hostile Witnesses: How the Ancient Enemies of the Church Prove Christianity

"A lively and popular account of four amazing personalities from early Christianity: a charming but simple visionary (Hermas), a world-famous catechist (Clement), a mysterious liturgist and antipope who became a saint (Hippolytus), and a genius theologian who became a source of controversy (Origen). They provide a precious window into the fascinating world of the first Christians."
— Jimmy Akin, Senior Apologist, Catholic Answers