Pope of a New World 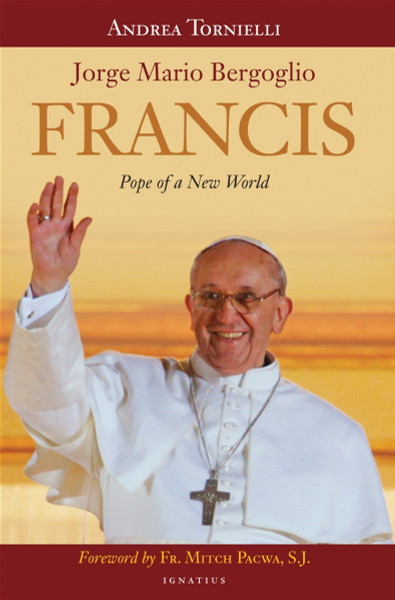 "Francis, rebuild my Church!" That is how St. Francis of Assisi heard the call of Christ. It is also how Jorge Mario Bergoglio, at the age of 76, and a Jesuit, seems to have accepted his election to the papacy with the choice of a name that no other pope has ever chosen.

Who is Pope Francis, elected in one of the shortest conclaves in history? Who is the man chosen to be the first pope from the Americas and the first Jesuit pope?

How does he see the world and his ministry? How does he understand his call to serve Christ, his Church, and the world? In short, what is the mind and heart of this new pope of a new world--of the Americas and the rest of the world of the 21st Century?

In the words, the ideas, and the personal recollections of Pope Francis--including material up to the final hours before his election--the most highly regarded Vatican observer on the international scene reveals the personality of this man of God, gentle and humble. The son of Italian immigrants to Argentina, he made radically following Christ and the way of non-violence the pillars of his pastoral ministry in a country, continually tormented by social and economic inequities.
This complete biography offers the keys to understanding the man who was a surprise choice, even a kind of revolutionary choice, for pope. It is the story of the humble pastor of one of the world's largest archdioceses; a cardinal who takes the bus, talks with common folk, and lives simply. It is the story of why the cardinal electors of the Catholic Church set aside political and diplomatic calculations to elect a pope to lead the renewal and purification of the worldwide Church of our time.

"May this knowledge of Pope Francis' past and background enlighten every reader ... [and] provide a context for the new surprises he seems capable of offering to the Church and to the modern world as a whole."
- Fr. Mitch Pacwa, S.J., From the Foreword

p>"Though the vast majority of Catholics are exceedingly pleased and edified by the love, simplicity, joy, and spiritual depth of Pope Francis, some press reports have criticized him for his "lack of response" to the terrible dictatorship of Jorge Redondo in Argentina, while others have complained about his stands on gay parenting and the life issues. In his timely biography of Pope Francis, Vatican insider Andrea Tornielli, has exposed the shallowness of these criticisms by giving a fair, objective and far more complete report of Archbishop Bergoglio's interaction with the dictatorship of Argentina (as well as its victims). He also presents the theological, sociopolitical, cultural, and spiritual depth with which Pope Francis treats marriage, the culture of life, social justice, and the preferential option for the poor.

As I moved through this biography, I began to appreciate the depth and complexity of Pope Francis -- a soul imbued with learning, compassion, intelligence, and wisdom, originating out of a profound love for Christ and a desire to serve him in every way possible-a true son of St. Ignatius who provided the world with a similar example, devotion and love." --Fr. Robert J. Spitzer, S.J., President, Magis Institute, Author, Ten Universal Principles: A Brief Philosophy of the Life Issues

"Catholics and others eager to know all they can about Pope Francis will learn a great deal from Andrea Tornielli's first-person account."
- James Hitchcock, Professor of History, St. Louis University, author of History of The Catholic Church

p>"In Francis: Pope of a New World, Italian journalist Andrea Tornielli provides us with a much-anticipated glimpse into the life and history of our new Holy Father, Pope Francis, as well as the events surrounding his election as Bishop of Rome and the first days of his pontificate. Tornielli introduces us to this humble Cardinal from Argentina who now serves as the Vicar of Christ - "Padre Jorge," as he is lovingly known by his flock in Buenos Aires. He relates the history of his early years, his vocation to the priesthood and a life poured out in loving service to Christ and His Bride, the Church.

He splendidly conveys our Holy Father's personal attributes of prayerfulness, devotion, humility, simplicity, affability, frugality, zeal for souls, ecumenical spirit and pastoral concern for the smallest and most vulnerable of God's children, whether found on city streets or in the poverty of the Villas Miserias. Readers will be touched by this account of the man who is now lovingly known as Our Holy Father, Pope Francis, and inspired by the message of God's mercy he seeks to bring to our present-day world."
- Mother Assumpta Long, O.P., Prioress General of The Dominican Sisters of Mary, Mother of the Eucharist in Ann Arbor, Michigan.

Andrea Tornielli is one of the best, if not the best, Vatican reporter out there. Period. He is the best-sourced, most accurate and one of the most knowledgeable reporters among the unique band of "Vaticanisti" who travel with the pope, digest theological treateses as bedtime reading and count cardinals and monsignors as friends. He has been fascinated by the church since he was 14, and it shows. Yes, he has a degree in classic Greek. But more importantly, he knows the Vatican and the people who inhabit it, and uses that knowledge to inform the world about what goes on in the frescoed halls of the Apostolic Palace. If anyone needed evidence, take his reporting of the conclave that elected Pope Francis the 265th Successor of Peter: His reports about the behind-the-scenes negotiations before the conclave were cited by cardinals as the reason for imposing a media blackout on the process. It didn't work.Tornielli kept on reporting, providing a modicum of transparency on the most secretive of processes." --Nicole Winfield, Associated Press