From Fire, by Water

My Journey to the Catholic Faith 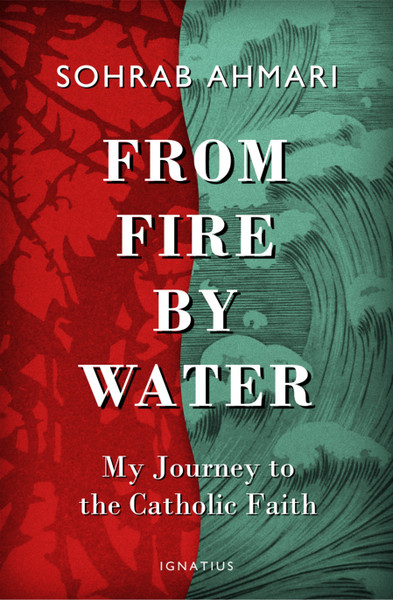 From Fire, by Water

Sohrab Ahmari was a teenager living under the Iranian ayatollahs when he decided that there is no God. Nearly two decades later, he would be received into the Roman Catholic Church.

In From Fire, by Water, he recounts this unlikely passage, from the strident Marxism and atheism of a youth misspent on both sides of the Atlantic to a moral and spiritual awakening prompted by the Mass. At once a young intellectual’s finely crafted self-portrait and a life story at the intersection of the great ideas and events of our time, the book marks the debut of a compelling new Catholic voice.

"Sohrab Ahmari is emerging as one of the finest minds and writers of his generation, and the story of his conversion recounted here will stay with the reader for a very long time."
— Archbishop Charles J. Chaput, from the Foreword

"From Fire, By Water is not so much about Sohrab Ahmari but about the work of divine grace in his soul disposed to hear God's voice calling him with immeasurable and enduring love. It is the story of the journey of faith in which it is always God Who first calls us to believe in Him and place all our trust in Him. The same humility before God, which disposed the author to respond to God's call, permits him to give a most compelling and indeed inspiring account of how he came to know God, to love Him and to serve Him with all his heart. The author's extraordinary gift for writing truly approaches, as best as one can at any given time, a true account of the incomparable beauty of the reality he recounts."
— Raymond Leo Cardinal Burke

"Relentlessly honest, deeply moving, Sohrab Ahmari's story of his intellectual and spiritual journey from dismissive disbelief to vibrant Catholic faith—a journey propelled by some intriguing companions, including Nietzsche, Camus, and Koestler—is food for both mind and soul and an important testimony to the invigorating power of truth."
— George Weigel, Author, Witness to Hope and The End and the Beginning

"This book is a testimony of Eucharistic triumph. God seeks us and will transform us if we let Him. Sohrab Ahmari's beautiful memoir will help all of us trust in God alone better."
— Kathryn Jean Lopez, Editor-at-Large of National Review

"Memoirs written by people who are still in their thirties are almost never of interest to anyone. Sohrab Ahmari's, however, is a grand exception. It's a gripping account of the fascinating life of someone who was born to a liberal family in post-revolutionary Iran, migrated to the United States where he and his mother lived among Mormons in Utah, made a series of bad choices, and found his way to political conservatism and a career in journalism, and wrestled with God—unsuccessfully—to stay out of the Catholic Church."
— Robert P. George, McCormick Professor of Jurisprudence, Princeton University

"Lives — indeed, as I believe, eternal destinies — will be changed by this book. I wish every angry young man who hates God could read this moving, challenging personal confession of a still-young man who has been where they are, and who gained wisdom and release."
— Rod Dreher, The American Conservative

"Buy Sohrab's superb book for its story of personal faith but also its revelations of life under a farcical theocracy."
— Tim Stanley, The Catholic Herald

"Remarkable. . . .  a book of many virtues, the most unexpected of which is Ahmari's subtle brand of comedy . . . .  From Fire, by Water is a spiritual memoir perfectly suited to our time."
— Jonathan V. Last, Commentary

"Ahmari's memoir took me to places I have never been, and gave me a fresh look at people and places that seemed very familiar. Most especially, Ahmari's book explored a restless human heart, searching and seeking, until, quite unexpectedly, coming to rest in the Lord."
— JD Flynn, Catholic News Agency

"If you're going to write a book about your religious conversion it'd better be a great yarn. And if you're going to write a memoir while you're still in your early thirties you'd better be a great writer. In From Fire, by Water Sohrab Ahmari has both boxes checked. . . . Ahmari is a precise and evocative writer, which makes From Fire, by Water easy reading and good reading."
— Matthew Hennessey, The University Bookman

"A thought-provoking story . . . a breath of fresh air . . .The author is a gifted wordsmith, ably portraying a variety of colorful scenes and scenarios — physical and philosophical."
— Lela Gilbert, Newsmax

"His book offers a long, candid, and unsparing look at the young Ahmari, at the Shi'ite Muslim society into which he was born in Iran, and the secular America where he came into maturity."
— Philip F. Lawler, author of Smoke of Satan; editor of Catholic World News

"From Fire, By Water is a book that I would place in the hands of any young, over-confident, over-zealous skeptic. It's a book that college-age kids need to read as they flirt, perhaps for the first time, with new ideas that sound avant-garde and rebellious for rebellion's sake, but only end up disappointing."
— Andrew Walker, The Public Discourse

"An arresting sort of modern-day permutation of St. Augustine's Confessions. Like Augustine’s spiritual autobiography, Ahmari's compellingly written memoir is punctuated with soul-aches and poignant laments for misspent time. It brims with final awe at the irruption of grace into a soul so wounded by sin."
— Julia Meloni, Crisis Magazine

"A wonderful read for anyone who is seeking a deeper meaning to life, whether they be persons of devout faith or of none at all."
— Christine Rousselle, The Washington Examiner

"Ahmari writes beautifully, and the story he tells is fascinating.... Although Ahmari's context is a different one from [Thomas] Merton's, more than once while reading the book I saw correlations between their autobiographies."
— Gregory Hillis, America

The Passion from Within