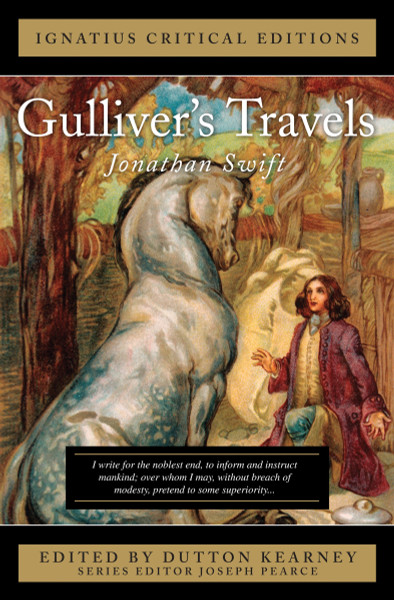 Gulliver’s Travels by Jonathan Swift is one of the greatest satirical works ever written. Through the misadventures of Lemuel Gulliver, his hopelessly “modern” protagonist, Swift exposes many of the follies of the English Enlightenment, from its worship of science to its neglect of traditional philosophy and theology. Swift’s satire on the threats posed by the Enlightenment and the embryonic spirit of secular fundamentalism makes Gulliver’s Travels priceless reading for today’s defenders of tradition. This new critical edition, edited by Dutton Kearney of Aquinas College, contains detailed notes to the text and a selection of tradition-oriented essays by some of the finest contemporary Swift scholars.

The Ignatius Critical Editions represent a tradition-oriented alternative to popular textbook series such as the Norton Critical Editions or Oxford World Classics, and are designed to concentrate on traditional readings of the Classics of world literature. Whereas many modern critical editions have succumbed to the fads of modernism and post-modernism, this series will concentrate on tradition-oriented criticism of these great works. Edited by acclaimed literary biographer, Joseph Pearce, the Ignatius Critical Editions will ensure that traditional moral readings of the works are given prominence, instead of the feminist, or deconstructionist readings that often proliferate in other series of 'critical editions'. As such, they represent a genuine extension of consumer-choice, enabling educators, students and lovers of good literature to buy editions of classic literary works without having to 'buy into' the ideologes of secular fundamentalism. The series is particularly aimed at tradition-minded literature professors offering them an alternative for their students. The initial list will have about 15 - 20 titles. The goal is to release three books a season, or six in a year.

"Macbeth is a splendid classroom tool that I am certain students will find very useful and illuminating . I have been using the King Lear book in several courses with very fine results. I also used the Frankenstein edition in two classes and the students seemed to find the essays very helpful. Thank you for this very necessary project of the Ignatius critical editions and for allowing me to make my small contribution to it."
—Robert Carballo, Millersville University