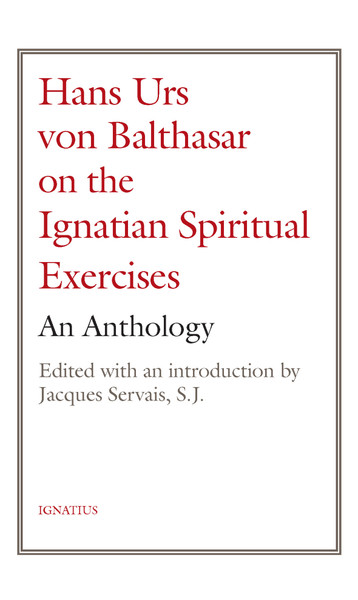 "I would like one day," Hans Urs von Balthasar wrote in 1952, "to write a book on Ignatius of Loyola, the saint of whom I will always consider myself the least of sons." The Jesuit-formed theologian from Switzerland—widely considered one of the greatest thinkers and spiritual writers of modern times—never got the chance to fulfill this dream.

Instead, Balthasar's whole theology, from Theo-Drama to Dare We Hope "That All Men Be Saved", is imbued with the influence of Saint Ignatius, founder of the Society of Jesus and author of the Spiritual Exercises, a multi-week retreat guide that has rejuvenated Catholic spirituality since the sixteenth century. Throughout Balthasar's priestly life, he led countless retreatants in the Ignatian Exercises, accompanying them in their discernment of God's call.

This anthology is an aid for those either giving or making an Ignatian retreat. Full of citations and equipped with four indexes, as well as many texts never before translated into English, it sifts Balthasar's writings for insights into almost every element of Ignatius' "libretto", sometimes diving into themes scarcely explored by others. Moreover, it maps out those hidden strains of Jesuit spirituality that run unnoticed through the theologian's oeuvre. Yet the book may help anyone at all who wants to engage more deeply with Jesus or come to grips with Church doctrine, for as Balthasar himself says, the Spiritual Exercises are both a "great school of Christocentric contemplation" and a "genuine interpretation of the deposit of the faith".

"Fr. Jacques Servais, S.J., renders a service to those who love and apply the Spiritual Exercises of Saint Ignatius, this 'theo-didact,' as von Balthasar names him.  These texts, springing from the author's personal experience and knowledge of the Spiritual Exercises, wedded to a fecund theological mind, will interest all who seek a deeper grasp of these Exercises."
—Timothy Gallagher, O.M.V., Author, The Discernment of Spirits: An Ignatian Guide to Everyday Living

"The Spiritual Exercises of St. Ignatius of Loyola were composed to rely on commentary, the commentary of one's own life experience. In this very unique volume, von Balthasar's dear Jesuit friend and brother Jacques Servais, S.J., has compiled his mentor's diary entries and reflections in such a way that they act as a running gloss on the Exercises. It is refreshing to see how the deepest of spiritualities is never separate from the most robust of orthodox theologies. As such, these pages are filled with the deepest convictions of von Balthasar's heart and mind, bringing the reader through many encounters with grace as well as with some real darkness."
— David Meconi, S.J., Director of Catholic Studies, Saint Louis University; Editor, Homiletic & Pastoral Review

"In this engaging anthology, Fr. Jacques Servais presents a compelling demonstration of the unity of theology and spirituality in von Balthasar's whole work. Here we see the profundity with which von Balthasar draws out and interprets the theological content embedded in the Spiritual Exercises. Here too we see that his chief concern is to draw us into Christ's own mission of total self-abandonment to the Father, for the life of the world. We are indebted to Father Servais for this entry point into the 'prayed theology' which is von Balthasar's signature!"
— Margaret Turek, S.T.D., Professor of Dogmatic and Spiritual Theology, St. Patrick's Seminary and University

"A singular service both to scholars of von Balthasar and to those with a significant interest in the Spiritual Exercises of St. Ignatius Loyola. The extensive introduction, drawing from his long association with Balthasar and his many years of engagement with the latter's work, has rich insights. In his choice of excerpts for this anthology, the editor has provided a treasure chest from which the individual may draw for contemplation and the scholar–thereafter–for profound theological research."
— Sister Gill Goulding, C.J., Ph.D, Professor of Systematic Theology, Regis College, University of Toronto

"Jorge Bergoglio, the first Jesuit pope, has popularized Ignatian terms: 'discernment (of spirits)', 'finding God in all things', 'thinking (or better, feeling) with the Church', 'consolation', the 'magis'—that is, God's greater glory. Hans Urs von Balthasar, too, was fascinated by the spirituality of St. Ignatius Loyola's Spiritual Exercises and over a lifetime explored their significance for the Church. Fr. Jacques Servais offers an eminently readable key to Balthasar's profound reflection on the place of Ignatian spirituality in the lives of individuals and in the life of the Church.  I highly recommend this brilliant synthetic study."
— Terrence Prendergast, S.J., Archbishop of Ottawa, Bishop of Alexandria-Cornwall

"Hans Urs von Balthasar is one of the most significant representatives of Catholic theology in the twentieth century. His many works, each quite different, all hinged upon his reading of the Gospel, and what's more, he always developed his thoughts in dialogue with the great figures of Christian spirituality, most significantly Saint Ignatius of Loyola. So many of Balthasar's writings echo this Ignatian influence, which touched the most fundamental decisions of his life. At the same time, the insights presented in these works can help bring us to a vivid interpretation of the Ignatian charism."
— Werner Löser, S.J., Professor Emeritus, Sankt Georgen Graduate School of Philosophy and Theology