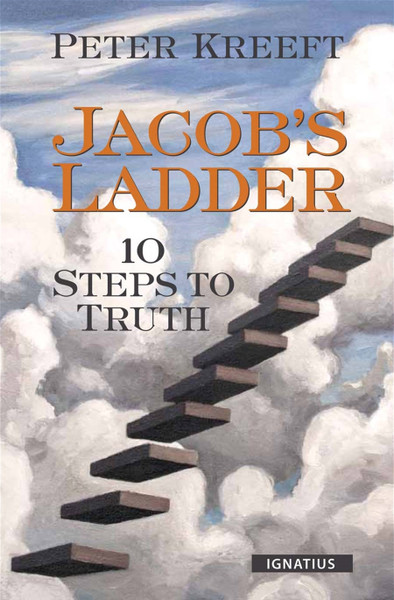 There are ten important questions everyone should ask; and the answers to these questions, which lead to ultimate truth, are a matter of reason, not of faith.

Well-known Catholic philosopher and writer Peter Kreeft tackles each of these questions in a logical step-by-step way, like climbing the rungs of a ladder. Because questions are best answered by dialogue, Kreeft answers these fundamental questions in an imaginary conversation between two very different people who meet at the beach.

Kreeft's characters begin at the beginning, at the bottom of the ladder, which is the passion for truth. When it comes to the most important questions a person can ask, no mere interest in philosophical dabbling will do. The passion for truth does not stop there, however, but carries the reader from one page to the next in this thought-provoking adventure of the mind.

Among the topics, or "steps", that Kreeft's characters delve into include:

And many other important questions and topics to help climb the ladder to the truth about life.

"When I was coming into the Catholic Church 25 years ago, the voice that stood out for me more than any other on the contemporary scene as an oasis of clear and accessible sanity was Peter Kreeft's. Jacob's Ladder shows that a mind, heart and soul filled with Catholic teaching only becomes richer, deeper and more beautiful with time. Lift this joyous chalice to the lips of your soul and drink deeply. It is satisfying indeed!"
- Mark Shea, author, By What Authority?

p>"Peter Kreeft is our generation's C.S. Lewis, as this brilliant new book of his further demonstrates. The genius of Jacob's Ladder lies in Kreeft's canny ability to capture the imagination with vivid and arresting prose while simultaneously leading the reader, step by step, above and beyond the cramped limitations of the imagination into the spacious and lofty heights of reason, reality, and truth."
- Patrick Madrid, author, Where is That in the Bible? p>"In Jacob's Ladder, Peter Kreeft offers a wonderful book for someone genuinely interested in asking profound questions and seeking profound answers. With clarity, wit, and insight, the characters of his dialogue consider some the most central questions in human life-including truth, meaning, love, God and Jesus-in a way both entertaining and accessible. The first chapter especially, considering and refuting various forms of relativism and subjectivism, is a necessary preamble to any serious discussion of anything."
- Christopher Kaczor, Author, The Seven Big Myths about the Catholic Church

"In this delightful and ingenious guidebook for living Catholic faith, Peter Kreeft removes most contemporary popular objections to embracing God, Jesus, and the Catholic Church. Using two characters, Mother, an imposing beach-going philosopher of life, and Libby, a 23-year old former journalist who has naively adopted the culture's critique of religion, Kreeft exposes the many fallacies in contemporary moral and philosophical relativism.

By imparting a deeper insight into the ideal of passion, truth, meaning and love, Mother creates a light to shine upon the true, good, and beautiful character of principles, God, Jesus, and Catholicism. This is a "must read" for those seeking a way out of our cultural malaise."
- Fr. Robert J. Spitzer, S.J., Author, Five Pillars of the Spiritual Life