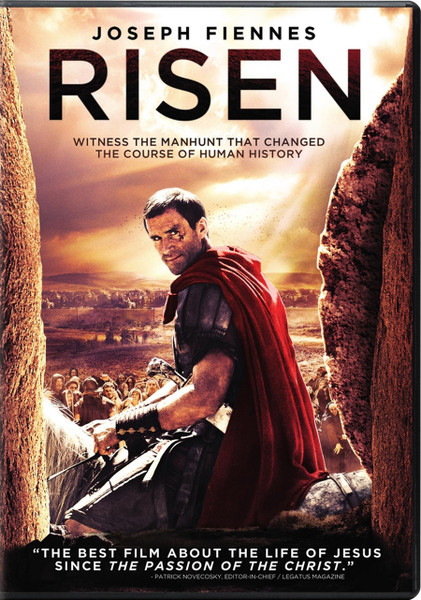 Risen is the epic Biblical story of the Resurrection, as told through the eyes of a non-believer. Clavius (Joseph Fiennes), a powerful Roman military tribune, and his aide, Lucius (Tom Felton), are tasked with solving the mystery of what happened to Jesus (Cliff Curtis) in the weeks following the crucifixion, in order to disprove the rumors of a risen Messiah and prevent an uprising in Jerusalem. Rated PG-13 for biblical violence including some disturbing images.

"Religiously themed films often have better intentions than their professional skills can support.  Risen is the exception – a superb cast (Joseph Fiennes, Peter Firth), an unusual and compelling story, and the world of First Century Israel vividly realized on the screen. Risen is more than a good film for believers; it's a great piece of film story-telling by any standard."
— Most Reverend Charles J. Chaput, O.F.M. Cap., Archbishop of Philadelphia

p>Risen draws viewers into this thought-provoking drama, reminding us that after encountering the Risen Lord, life will never be the same!"
— Rev. Msgr. Thomas Fucinaro, Official, Congregation for Divine Worship and the Discipline of the Sacraments, Vatican p>Risen answers the biggest (and most important) question of all: What is faith? It takes us on a walk along the difficult road that leads one towards belief, and from that moment, nothing will ever be the same. Risen is a film that every person should see."
— Claudia Di Giovanni, Delegate of the Vatican Film Library

"Blessed with brilliant cinematography and powerful performances by a first-rate cast, Risen draws us fully into the first aftershock and wonder of a real and supernatural event, the consequences of which are still reverberating, still filling us with awe, 2000 years later. Well done, all around!"
— Elizabeth Scalia, U.S. Editor-in-Chief, Aleteia.org

p>Risen is a refreshing faith-based movie that delivers a well-written, well-acted, more sophisticated, profound and creative telling of the Jesus-Story."
— Monica Migliorino Miller, Crisis Magazine p>Risen is a truly great Biblical epic that helps us grow in faith and love for our Lord as we learn more about ourselves and about Him! It is beautifully filmed and well acted, providing viewers with a new perspective on those historic events we thought we knew so well."
— Rev. Msgr. Richard Soseman, Official, Congregation for the Clergy, Vatican