The Bard of Avon and the Church of Rome 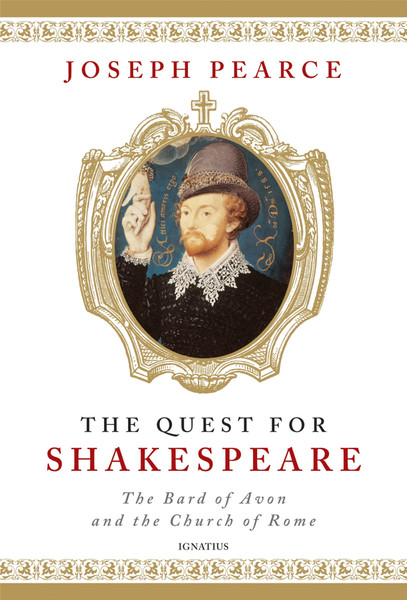 Highly regarded and best-selling literary writer and teacher, Joseph Pearce presents a stimulating and vivid biography of the world’s most revered writer that is sure to be controversial. Unabashedly provocative, with scholarship, insight and keen observation, Pearce strives to separate historical fact from fiction about the beloved Bard.

Shakespeare is not only one of the greatest figures in human history, he is also one of the most controversial and one of the most elusive. He is famous and yet almost unknown. Who was he? What were his beliefs? Can we really understand his plays and his poetry if we don’t know the man who wrote them?

These are some of the questions that are asked and answered in this gripping and engaging study of the world’s greatest ever poet. The Quest for Shakespeare claims that books about the Bard have got him totally wrong. They misread the man and misread the work. The true Shakespeare has eluded the grasp of the critics. Dealing with the facts of Shakespeare’s life and times, Pearce's quest leads to the inescapable conclusion that Shakespeare was a believing Catholic living in very anti-Catholic times.

Many of his friends and family were persecuted, and even executed, for their Catholic faith. And yet he seems to have avoided any notable persecution himself. How did he do this? How did he respond to the persecution of his friends and family? What did he say about the dreadful and intolerant times in which he found himself? The Quest for Shakespeare answers these questions in ways that will enlighten and astonish those who love Shakespeare’s work, and that will shock and outrage many of his critics. This book is full of surprises for beginner and expert alike.

"Joseph Pearce writes piercingly brilliant books. This is one of them. He usually writes dramatic biographies.This is not one of them. It is not a biography and it is the least dramatic book he has written. But it is also the most important one. To see its importance,try the following thought-experiment. Imagine a book that convincingly proved that Homer was a Jew, or that Milton was a lapsed Catholic, or that Dante was a proto-Protestant.

The idea would have far-ranging consequences. It would cast a new light on everything we knew about Homer, or Milton, or Dante. In his next book Pearce will trace the consequencesof Shakespeare's Catholicism in his plays.In this book, he proves it historically. I mean provesit. (Pearce would make a formidable lawyer.) The evidence is simply overwhelming."
— Peter Kreeft, Ph.D., Boston College,Author, Summa of the Summa

p>"I've long suspected that there was a deep Catholic sensibility in the plays of Shakespeare — an emphasis on man's powerlessness without grace, yet alsoan openness to the sacramentality of nature, and tothe energetic work of dutiful yet often mistrusted or despised servants. Pearce shows that Shakespeare himself was such a dutiful servant, ever dutiful to the Queen, but to God first. He does not leap to conclusions, but builds a case that is meticulous,reasonable, and convincing."
— Anthony Esolen, Ph.D., Providence CollegeProfessor of Renaissance English

"Joseph Pearce has brought together here a mass of material on the vexed question as to Shakespeare's religious affiliation — a question which scholars have traditionally tried sedulously to ignore. But it is a question of more than merely neutral historic curiosity. Readers, I feel sure, will be quickly drawn in to the matter. Once again, we owe Mr. Pearce a great debt."
— Thomas Howard, Ph.D.Author, Dove Descending: T. S. Eliot's Four Quartets

p>"What more is there to be said about William Shakespeare? Yet the supply of books on the great dramatist is never ending. Now, however, there is a new reason for this supply. The religion of Shakespeare, and specifically his Catholicism, is now recognized as a ‘hot topic' both in the academicand the publishing world. And now Joseph Pearce, long recognized as a brilliant writer on great English Catholics, has gone back in The Quest for Shakespeare to this greatest of English Catholics,showing precisely how his greatness consists in hishidden Catholicism. This is a book that bodes well to proving a literary masterpiece."
— Peter Milward, S.J.Author, Shakespeare the Papist

"Pearce writes with historical insight on one hand and poetic imagination on the other. Perhaps our greatest living biographer, Pearce has the uncanny ability to get into the minds, hopes, fears, and motivations of his subjects."
— Bradley J. Birzer, Ph.D.Author, J. R. R. Tolkien's Sanctifying Myth

p>"Practicing the best virtues of detective, lawyer,scholar, and storyteller, Joseph Pearce convincingly reconstructs the historical crucible which produced the world's greatest poet. His explication of how Shakespeare was shaped by realities of personal courage, political danger, and eternal sacramentallove will unshutter long obscured lamps within the plays and poems for every reader."
— Gene Fendt, Ph.D., University of Nebraska,Author, Is Hamlet a Christian Drama?

Clare Asquith's Shadowplay (2005) argued from cryptic literary evidence that Shakespeare was a Catholic, necessarily clandestine during his era, when to be so entailed huge fines, arrest, and even execution. Eschewing Asquith's method (merely pointing out a pun in the occasional sonnet), Pearce also concludes that Shakespeare was a Catholic and, indeed, that one must be prejudiced to insist otherwise. The evidence he cites shows that John Shakespeare's will was based on a Catholic model; that John and son William each left bequests and executorship to Catholics; that Shakespeare's daughters were named out of the Apocrypha (biblical writings by Catholic, but not Protestant, lights); that Shakespeare bought property that benefited Catholics, including a longtime venue for clandestine masses; that he was married by a Catholic priest miles away from his home parish; and so on and so on.

Pearce also argues that Shakespeare's talent may have led the authorities to wink at his Catholicism, as they did with the gifted composer William Byrd. It helps Pearce that, as usual, he's a delight to read.
—Ray Olson, From Booklist