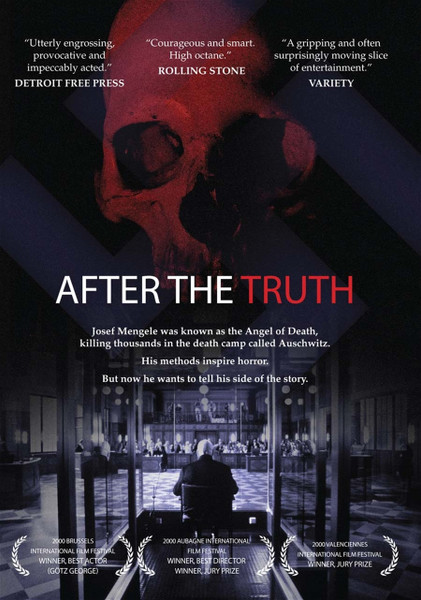 This powerful, award-winning film tells the story of one of the greatest challenges the legal system has ever faced. Dr. Josef Mengele, the infamous “Angel of Death” in Auschwitz, and one of the most wanted Nazi war criminals, turns himself in after 30 years in hiding to tell his “truth” to the world. Thus ensues a battle between conscience and evil...
After The Truth presents us with Mengele’s hypothetical trial, which forces us to review that judgment, especially in the context of the wider negative attitudes towards the dignity of human life in the German society. The responsibility of our sense of right and wrong is mirrored in the film by attorney Peter Rohm, whom Mengele requests to be his lawyer, and whose idealistic belief in the legal system conflicts heavily with his emotional resistance to defending such a monster. The viewer is presented with Josef Mengele the man, flesh and blood, and must hear him out as he emotionally yet rationally states the reasons for his work, and his supposed “mercy” that he imposed on his countless “patients” - even as some of his former “patients” who survived Auschwitz confront him in court with the horrible things he did to them. As the intense trial proceeds to its dramatic finish, we discover that the dark attitudes about the dignity of human life in Mengele’s day and attitudes in our world today are much more similar than many would think.

This movie contains the following language tracks: German with English and Spanish subtitles. This DVD is Not Rated

Find out more about After the Truth by clicking here.

“A gripping and often surprising moving slice of entertainment.”
—Variety