A Catholic Critique of Racism and Critical Race Theory 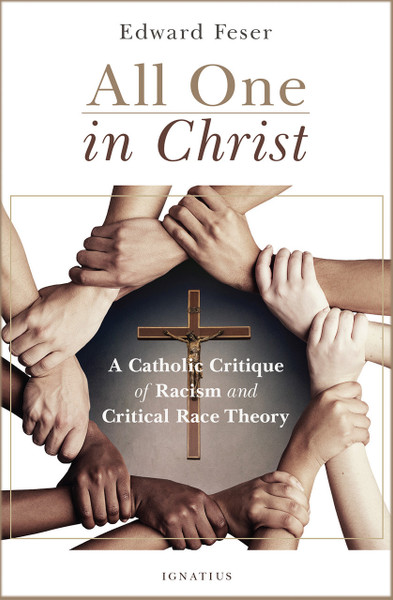 What does the Catholic Church teach about racism? What should Catholics think about Critical Race Theory, which is currently being widely promoted in the name of antiracism?

All One in Christ lucidly explains the Church's clear and consistent condemnation of racism, showing that the condemnation is not a recent development but deeply rooted in centuries of papal teaching and Scholastic theology.

This book also demonstrates that Critical Race Theory, far from being a remedy for racism, is, in fact, a new and insidious form of racism that cannot be reconciled with the social teaching of the Church and the call of Christ. Edward Feser exhorts Catholics to oppose Critical Race Theory—precisely because they are opposed to racial injustice. They must reaffirm that all human beings are rational creatures capable of knowledge and charity and redemption from sin through grace.

"This is the best book I’ve read on the topic. Ed Feser writes in accessible yet nuanced ways to demonstrate the philosophical and theological errors of both racism and Critical Race Theory."
—Ryan T. Anderson, Ph.D., President, Ethics and Public Policy Center; Author, Tearing Us Apart: How Abortion Harms Everything and Solves Nothing

"There is not a better book on the subject from a Catholic perspective. All One in Christ should be required reading for any Catholic prelate, parent, principal, or college president."
—Francis J. Beckwith, Ph.D., Professor of Philosophy and Church-State Studies, Baylor University

"Feser's account of the Church's opposition to slavery is authoritative, but it is his devastating takedown of Critical Race Theory that makes this book so special."
—Bill Donohue, President, Catholic League for Religious and Civil Rights; Author, Common Sense Catholicism

"Dr. Feser shows the consistent magisterial emphasis on the dignity of every human person and brilliantly articulates the Church’s clear and unambiguous teaching against racism. An absolute must-have for all Catholics who want to be well informed about racism and Critical Race Theory."
—Deacon Harold Burke-Sivers, Author, Behold the Man: A Catholic Vision of Male Spirituality

"Edward Feser reveals that Critical Race Theory, by its own definition, embraces partiality, thus making it clear that this theory is in no way an answer to racism, but is, in fact, a covert form of racism."
—Rev. Walter B. Hoye, Founder, Issues4Life Foundation

"A careful examination of Critical Race Theory that goes beyond the political and journalistic squabbles to fundamental questions of truth and justice. Ed Feser maintains steadiness and balance as he brings faith and reason to bear on the most heated public controversies."
—Robert Royal, Author, A Deeper Vision: The Catholic Intellectual Tradition in the Twentieth Century

"Edward Feser offers an analysis that helps Catholics better understand the Church’s stance on racism and uphold the inherent dignity of each human Being.”
—Fr. John M. McKenzie, National Shrine of the Little Flower Basilic

On the Way to Jesus Christ

Five Proofs of the Existence of God