Archbishop Fulton Sheen: Servant of All 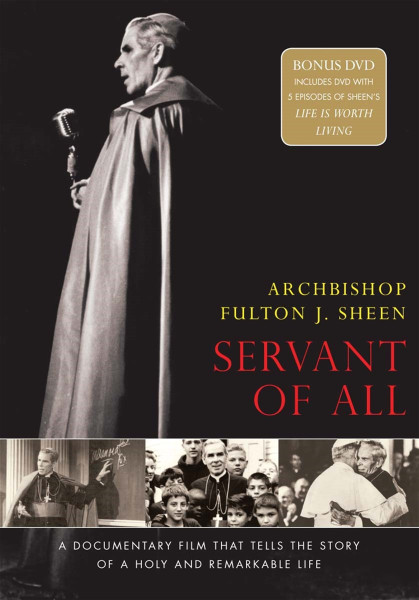 Archbishop Fulton Sheen: Servant of All

This special double DVD film package includes an acclaimed new film on the great Archbishop Fulton Sheen, Servant of All, along with five of his most popular television programs from his #1 rated TV series, Life is Worth Living. For decades Fulton Sheen was a shining example of what it means to serve God and men. His TV series reached 30 million viewers weekly, and his profound words were captured in over 100 books. Millions were influenced by the way he lived, what he taught and the witness of his personal relationship with God. His cause for sainthood is progressing along in Rome.

This powerful film Servant of All introduces the beloved Archbishop to a new generation that greatly needs his inspiring example of love for God and neighbor. It reveals how the impact of Sheen's prolific life and works continue on in those whose lives he forever changed. Guests interviewed for this film include Fr. Andrew Apostoli, Archbishop Timothy Dolan, Regis Philbin, Fr. Jonathan Morris, biographers of Sheen, his surviving relatives, friends, and many others who were influenced by him.

The five remastered films from his award-winning TV series present Sheen himself with his unique, captivating teaching style on the crucial importance of faith, love and spirituality. The programs are Ages of Man, False Compassion, Love is a Many Splendored Thing, The Divine Sense of Humor and Angels.

Through the Year with Fulton Sheen