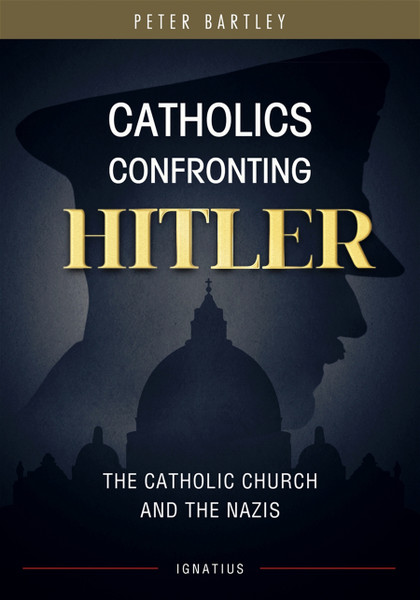 Written with economy and in chronological order, this book offers a comprehensive account of the response to the Nazi tyranny by Pope Pius XII, his envoys, and various representatives of the Catholic Church in every country where Nazism existed before and during WWII.

Peter Bartley makes extensive use of primary sources letters, diaries, memoirs, official government reports, German and British. He manifestly quotes the works of several prominent Nazis, of churchmen, diplomats, members of the Resistance, and ordinary Jews and gentiles who left eye-witness accounts of life under the Nazis, in addition to the wartime correspondence between Pius XII and President Roosevelt.

This book reveals how resistance to Hitler and rescue work engaged many churchmen and laypeople at all levels, and was often undertaken in collaboration with Protestants and Jews. The Church paid a high price in many countries for its resistance, with hundreds of churches closed down, bishops exiled or martyred, and many priests shot or sent to Nazi death camps.

Bartley also explores the supposed inaction of the German bishops over Hitler's oppression of the Jews, showing that the Reich Concordat did not deter the hierarchy and clergy from protesting the regime's iniquities or from rescuing its victims. While giving clear evidence for Papal condemnation of the Jewish persecution, he also explains why Pius XII could not completely set aside the language of diplomacy and be more openly vocal in his rebuke of the Nazis.

"Vicious allegations against Pope Pius XII and the Catholic Church in Germany get mindlessly repeated. The best way to answer them is with a calm and detailed account of the facts. Bartley's well-documented volume shows the tireless work of Catholics to oppose the Nazi regime, to defend those being attacked, and to preserve the liberty of the Church."
— Joseph Koterski, S.J., Professor of Philosophy, Fordham University

p>"A magnificent addition to the small library of works which put the lie to the slanderous assertion that the Catholic Church was silent in the face of Nazi atrocities."
— Gerard V. Bradley, Ph.D., Professor of Law, University of Notre Dame p>"An authentic history from a perspective designed to reach the truth, not a preconceived answer. The author uses primary sources to push past the disinformation and to reveal how the Catholic Church confronted the horrors of World War II and the Shoah."
— Ronald Rychlak, Author, Hitler, the War and the Pope

"This amazing chronicle exposes the sacrifices and the selflessness not only of the clergy, from popes to priests, but also of countless laity who stepped forward to confront the unspeakable evil of Hitler and his Third Reich. As a witness of these times I am greatly encouraged by this accurate and descriptive rendering."
— Kurt von Schuschnigg, Author, When Hitler Took Austria

p>"Illustrates the Catholic Church's response to the rise of Adolf Hitler and his Nazi regime like no other work to date. It will leave the reader with new respect for both the complexities involved and the enormous amount of heroism displayed."
— Tim Staples, Catholic Answers p>"A redeeming account of the great men, plus the lesser known individuals and groups, that opposed Hitler's madness. The Catholic opposition to Adolph Hitler is a subject that we cannot learn too much about."
— Paul Kengor, Ph.D., Professor of Political Science, Grove City College

p>"Unmasks the falsehoods and shines the light of truth on the fact that Catholics from the pope on down bitterly fought Hitler and sought to undermine his Satanic program at every turn."
— Jimmy Akin, Author, The Fathers Know Best p>"A frank and realistic assessment of Catholics during the years of Nazi power in Europe. It is a well-researched and important book, dispelling clich‚s and opening up critical areas to examination and discussion."
— Joanna Bogle, EWTN Host, The Military Orders and the Crusades