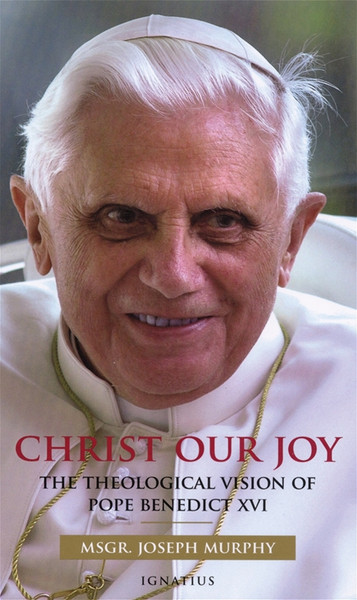 Noticing how often the new Pope had the topic of "joy" as the central theme of his many addresses, Murphy delved into the vast writings of the Pope, before and after his election to the papacy, and found that the theme of joy has pervaded all of his theology. Recognizing the Pope's invitation to joy as a key to understanding his basic theological vision, Murphy develops those ideas and writings in a creative way, and helps the reader to engage personally with the original and pastoral mind of Joseph Ratzinger, professor, pastor, and now Pope Benedict XVI.

This joy is nothing other than the joy of the Christian faith. Indeed, the "first word of the New Testament", says Pope Benedict XVI, "is an invitation to joy". The Gospel of Jesus Christ, he insists, is not a burdensome imposition but is truly "glad tidings" for mankind. Christianity is the key to true and lasting joy, the only joy that abides in the midst of life's anxieties and difficulties.

Written in a clear and engaging style, this book argues that joy is central to all of Pope Benedict's thought. All the other great themes of the Christian faith are intimately connected with it and radiate out from it. The world is in need of hearing once again the message of joy which Jesus Christ makes known.

For priests, religious and laity who are concerned with presenting the Christian message in a positive, attractive and convincing way, as well as for all who wish to delve into the rich and exciting thought of Pope Benedict XVI, one of the most inspiring Christian thinkers of recent decades, this timely book will provide insight for personal reflection, preaching and teaching.

The author has immersed himself in Pope Benedict's writings, many of which are occasional or fragmentary, and has made of them a coherent whole. What a surprise for many less perceptive critics to find that the motif of joy - of all things - could well be considered the master-theme of Joseph Ratzinger's work.
— Aidan Nichols, O.P., author of Lovely Like Jerusalem

p>"Joy among friends is contagious. This book is a lucid introduction to Pope Benedict's contemplative wisdom, the fruit of his profound friendship with Jesus Christ. Such friendship expands into a vast communion of saints and scholars, many of whom appear in the Pope's writings and addresses. The human mind and heart can find no greater joy than that found in friendship with the Father, Son, and Holy Spirit."
— Fr. Matthew Lamb, Chairman and Professor, Department of Theology at Ave Maria University.

"In this very readable and informative work, Monsignor Murphy takes his start from the observation of the profound spiritual joy that Pope Benedict exudes in his homilies, addresses, and writings not only as Pope but throughout his life as priest, professor, theologian and Bishop. Murphy then follows this spiritual joy as a common thread running through the writings of Joseph Ratzinger over many decades, and joy becomes the prism through which the Holy Father's thought is viewed comprehensively. Even apart from the value of citations that he gathers together – which by itself already constitute a real contribution - Murphy has masterfully synthesized the material. He has also made the theology of Joseph Ratzinger his own so as to be able to enter together with him into dialogue with the Sacred Scriptures, with the Fathers of the Church, and with various modern and post-modern authors, finding in the "private" theology of the present Holy Father a sure antidote to the listless.

The same spirit of joy is shown every aspect of the Pope's thought regarding the Holy Trinity, the Church, the Eucharist, and eschatology, thus helping to account for the attractive power of his teaching to which the vast crowds at his Wednesday audiences now testify. Certainly the vast theological contribution of Joseph Ratzinger prior to his election to the Papacy must not be allowed to be forgotten now that the world knows him primarily as Pope Benedict XVI, and Msrg. Murphy has provided a great service by providing such a refreshing and interesting window into those writings, some of which were previously inaccessible to readers in the English language."
— Cardinal Justin Rigali, Archbishop of Philidelphia

Cause of Our Joy (Digital)

Cause of Our Joy

The Sacraments, Source of Our Life in Christ

Cause of Our Joy

Cause of Our Joy (Digital)

Praying to Our Lord Jesus Christ