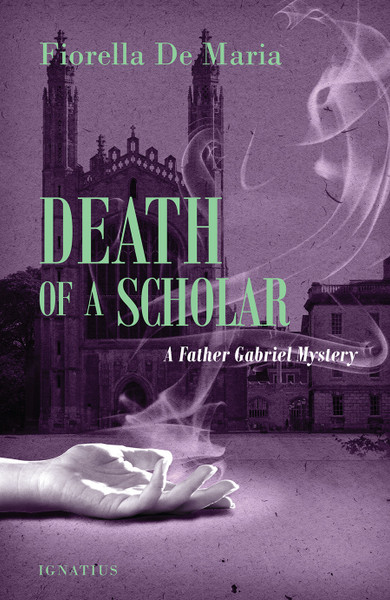 Father Gabriel spends a few days of relaxation at his old Cambridge College, the guest of friend Arthur Kingsley from his student days. Kingsley is now a respected scientist and a Fellow of St Stephen's College, but after an enjoyable evening dining at High Table, Gabriel receives the shattering news that Daphne Silverton, Kingsley's brilliant young protégée, has been found dead in her laboratory after what appears to have been a tragic accident. Daphne was universally loved, but Gabriel's instincts tell him that her death was a little too perfectly staged to have been an accident.

After an emotional reunion with the parents of his late wife, Gabriel seeks the truth about Daphne's demise. His investigations lead him to the Peace Union and its Ban the Bomb campaign, another member of Daphne's laboratory is found dead. Gabriel struggles to lay aside his personal loyalties and confront the possibility that there are dark secrets lurking behind both deaths.

This fourth book in the popular Father Gabriel series examines the moral minefield of the complicity of scientists in the manufacture of weapons of mass destruction. It also reveals more about Gabriel's past.

"It's hard to believe that a story which is this much fun could be this good for the soul! So good that I've been using this novel as lectio divina. There's real theology here. And Fiorella De Maria gets the English Benedictines exactly right."
— Fr. Augustine Wetta, O.S.B, Author, Humility Rules

"This detective story draws you in with a familiar English coziness and the historic setting of Cambridge but leads to a fascinating exploration into the depth of human complexity in a broken postwar world. Father Gabriel's humble insight makes for an unassuming but perceptive detective who understands the staggering weight of secrets and sin."
— Christy Isinger, Co-host, Fountains of Carrots Podcast

“Evocative of the golden age of detective fiction. Like Lord Peter Wimsey, Inspector Morse, and Hercule Poirot, Father Gabriel shows us why we should avoid Great Britain's crime-ridden universities. This intriguing murder mystery provokes and entertains while exploring the legacy of war and the need for justice and reconciliation."
— Rhonda Ortiz, Author, In Pieces

From Death to Life