Defenders of the Faith in Word and Deed (Digital) 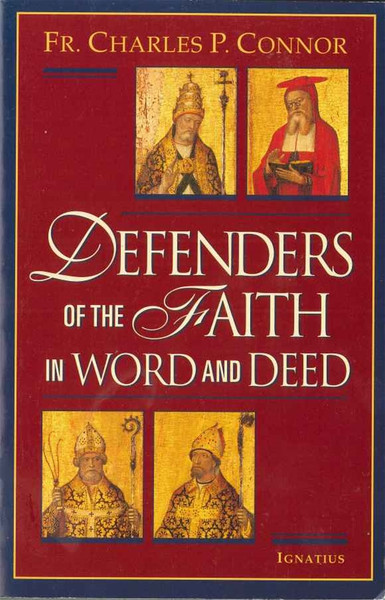 Defenders of the Faith in Word and Deed (Digital)

Defenders of the faith have been raised up in every era of the Church to proclaim fidelity to the truth by their words and deeds. Some have fought heresy and overcome confusion like Athanasius against the Arians and Ignatius Loyola in response to the Protestant reformers. Others have shed their blood for the faith, like the early Christian martyrs of Rome, or Thomas More, John Fisher and Edmund Campion in Reformation England.

Still others have endured a "dry" martyrdom like St. Philip Howard, Cardinal Joseph Mindszenty and Jesuit Walter Ciszek. Intellectuals have been no less conspicuous in their zealous defense of the faith, like Bonaventure, Albert, Thomas Aquinas, or Cardinal Joseph Ratzinger. The stories of all these, and more, are told here in this book.

"he holiness, heroism, and perseverance of the men and woman described by Fr. O'Connor will inspire and instruct readers defending the Catholic Faith in every sort of situation. Each chapter is a well-crafted portrait filled with historical detail, theological insight, and lessons about living and spreading the Gospel in trying times. A seamless combination of history, biography, apologetics, and evangelization."br />Carl OlsonAuthor, Will Catholics Be "Left Behind"?

Fr. Charles Connor, a Church historian, is the host of several 13-part series on EWTN, and is the author of the best-selling Classic Catholic Converts.

Light of the Word (Digital)