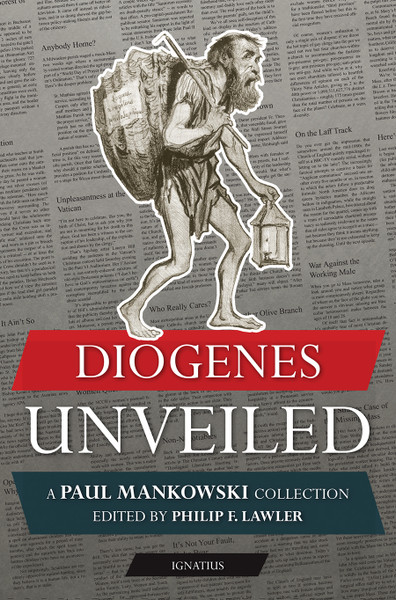 This book provides an indepth sampling of the best satirical writings by Fr. Paul Mankowski, S.J., a brilliant, perceptive, and knowledgeable analyst of Church affairs during the early twenty-first century.

Writing under the pseudonym Diogenes, Fr. Mankowski delighted his many readers with his keen observations and biting wit. Fr. Mankowski had a special gift for satire, and—appropriately for a man who had been a boxer in his student days—he never pulled his punches. Yet he could empathize with confused teenagers, elderly dementia patients, and ordinary Catholics in the pews. While teaching in Rome, he spent his Christmas vacations working among the poorest of the poor with the Missionaries of Charity, and some of his journal entries about these experiences are included in this collection.

Diogenes could be a cynical commentator, but the man behind this persona was a committed and self-sacrificing Catholic priest.

“Fr. Paul Mankowski, S.J., combined a penetrating insight into follies ecclesiastical, political, and cultural
with a biting wit and a pen that kept his readers eager for more—the ones who weren’t enraged by his musing, that is. Too bad for the latter, for Fr. Mankowski was an honest man afoot in an often dishonest world.”
— George Weigel, Distinguished Senior Fellow, Ethics and Public Policy Center

"Writing as Diogenes, Fr. Mankowski was not only prescient and precise in exposing the culture-bound
hypocrisies within the Church, but brilliantly entertaining. His was a rare combination of fidelity, self-assurance, and wit, which encouraged many in the trenches."
— Jeffrey Mirus, Ph.D., President, Trinity Communications; Editor, CatholicCulture.org

"In this book, I found that all the things I wish had been said about our timorous hierarchy and various
Church scandals actually had been said by this courageous Jesuit (under his Diogenes nom de guerre). Fr. Paul Mankowski scorns the things deserving scorn. For instance, he is blistering in his unrelenting critique of the ‘lavender mafia’. While his pen drips with acid, he also writes with lyrical realism and spiritual beauty about his sojourns with the Missionaries of Charity."
— Robert Reilly, Author, America on Trial: A Defense of the Founding

"To say that Fr. Paul Mankowski was multitalented and had a multifaceted persona is a hint to the variety of essays you will find in this collection. Everyone who knew him remarked on his singularity—there was no one else like him, so intelligent and learned, so critical and ribald, so generous, so faithful and obedient, to give just a few apt adjectives.”
— Janet Smith, Ph.D., Editor, Living the Truth in Love: Pastoral Approaches to Same-Sex Attraction

"Pope Francis calls for parrhesia—bold speech without fear or favour. Fr. Paul Mankowski, S.J., did just
that. Denouncing the ‘tactical mendacity beloved of Roman churchmen’, he was a formidable foe of cowardice and corruption wherever he found it. It was found aplenty in the Society of Jesus, so he was silenced. Phil Lawler gave the silenced Mankowski a voice as Diogenes, and now we hear him anew, when senior Jesuit voices are still betraying the truth."
— Fr. Raymond de Souza, Editor in Chief, Convivium; Columnist, National Catholic Register