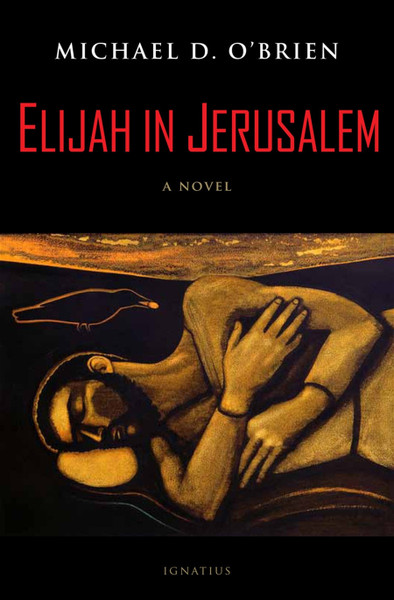 Elijah in Jerusalem, the long-awaited sequel to the acclaimed, best-selling novel Father Elijah: An Apocalypse,is the continuing story of the Catholic priest called to confront a powerful politician who could be the Antichrist foretold in the Bible.

In this sequel, now-Bishop Elijah, wanted for a murder he did not commit, tries again to meet the President. Accompanied by his fellow monk Brother Enoch, he enters Jerusalem just as the President arrives in the holy city to inaugurate a new stage of his rise to world power. This time Elijah hopes to unmask him as a spiritual danger to mankind. As the story unfolds, people of various backgrounds meet the fugitive priest, and in the encounter their souls are revealed and tested.

Elijah perseveres in his mission even when all seems lost. The dramatic climax is surprising, yet it underlines that God works all things to the good for those who love him.

p>"A book you can't put down. O'Brien is a master in narrating to us how the diabolic opposition to God might play itself out in our time."
— Fr. James V. Schall, S.J., Author, The Order of Things p>"I have read all of O'Brien's novels, but only while reading this one did I clearly notice the most significant power all of them have: something, or Someone, in these novels wakes me up, makes me wiser and holier."
— Peter Kreeft, Ph.D., Author, Because God Is Real p>"Equal parts a thriller, a meditation on the life of faith, and a Canterbury Tales–like series of vivid snapshots of men and women struggling with good and evil, Elijah in Jerusalem offers a cinematic and thought-provoking reading experience."
— Holly Ordway, Ph.D., Author, Not God's Type

"It's been twenty years since the dullness of contemporary literature was set ablaze by the brilliance of Michael O'Brien's classic novel, Father Elijah. It is, therefore, a true joy that this long-awaited sequel has finally been published."
—Joseph Pearce, Author, Catholic Literary Giants

p>"O'Brien is a masterful storyteller and a gifted artist. This beautiful depiction of human struggle and good versus evil will move and inspire you."
— Danielle Bean, Editor, Catholic Digest p>"Elijah in Jerusalem takes the reader on a journey through Christianity's ancestral heartlands that is at times both moving and terrifying. Michael O'Brien's spiritual epic holds up a mirror to the moral chaos of the contemporary world without depriving the reader of hope."
— Fiorella De Maria, Author, Poor Banished Children p>Elijah in Jerusalem is one of O'Brien's best-crafted books, a fast-moving, suspenseful page-turner adorned with lyrical graces and moments of joy which alternate with stark terror and evocations a powerful presence of evil so palpable that it will prompt sober reflection on our troubled times."
—David Lyle Jeffrey, Ph.D., Distinguished Professor of Literature and the Humanities, Baylor University p>"The story of Father Elijah, who fights against the most misleading forms of evil with the weapons of Christ—courage, humility, charity—will appeal to anyone who is in search of heroism and truth. A thrilling novel full of deep intelligence and spirituality, tenderness and beauty."
— Astrid de Larminat, Le Figaro newspaper