Worship of God in Liturgy and Sacrament 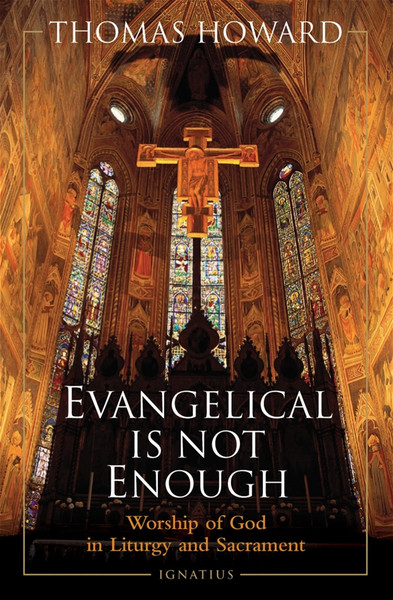 In this deeply moving narrative, Thomas Howard describes his pilgrimage from Evangelicalism (which he loves and reveres as the religion of his youth) to liturgical Christianity. He soon afterward became a Roman Catholic. He describes Evangelicalism with great sympathy and then examines more formal, liturgical worship with the freshness of someone discovering for the first time what his soul had always hungered for. This is a book of apologetics without polemics. Non-Catholics will gain an appreciation of the formal and liturgical side of Catholicism. Catholics will see with fresh eyes the beauty of their tradition. Worship, prayer, the Blessed Virgin, the Mass, and the liturgical year are taken one after the other, and what may have seemed routine and repetitive suddenly comes to life under the enchanting wand of Howard's beautiful prose.

Howard unfolds for us just what occurs in the vision and imagination of a Christian who, nurtured in the earnestness of Protestant Evangelicalism, finds himself yearning for "whatever-it-is" that has been there in the Church for 2000 years. It traces Howard's soul-searching and shows why he believes the practices of the liturgical Church are an invaluable aid for any Christian's spiritual life. Reminiscent of the style and scope of Newman, Lewis and Knox, this book is destined to be a classic.

"The question, What is the Church? becomes, finally, intractable; and one finds oneself unable to offer any very telling reasons why the phrase 'one, holy, catholic, and apostolic', is to be understood in any other than the way in which it was understood for 1500 years."
-- Thomas Howard