Philosophers Explain Their Turn to Catholicism 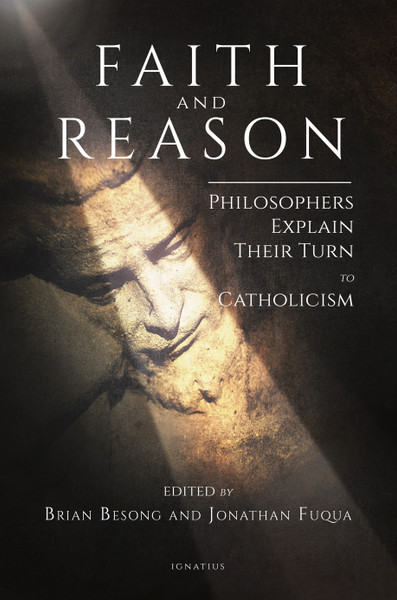 Too smart to believe in God? The twelve philosophers in this book are too smart not to, and their finely honed reasoning skills and advanced educations are on display as they explain their reasons for believing in Christianity and entering the Roman Catholic Church.

Among the twelve converts are well-known professors and writers including Peter Kreeft, Edward Feser, J. Budziszewski, Candace Vogler, and Robert Koons. Each story is unique; yet each one details the various perceptible ways God drew these lovers of wisdom to himself and to the Church. In every case, reason played a primary role. It had to, because being a Catholic philosopher is no easy task when the majority of one's colleagues thinks that religious faith is irrational.

Although the reasonableness of the Catholic faith captured the attention of these philosophers and cleared a space into which the seed of supernatural faith could be planted, in each of these essays the attentive reader will find a fully human story. The contributions are not merely collections of arguments; they are stories of grace.

"These philosophers stand as powerful witnesses to the beauty of Catholic truth. Their intellectual pilgrimages reveal the irresistible attraction that the Catholic Church alone, of all religious institutions, holds for human reason."
— Michael Augros, Ph.D., Author, The Immortal in You and Who Designed the Designer?

"If philosophy is in league with Catholicism, as these converts claim, and if 'philosophy always buries its undertakers', as Gilson famously said, is it too much to see in this volume the first buds of a second spring—a new civilization based upon philosophizing that is wise as well as clever?"
— Michael Pakaluk, Ph.D., Professor of Ethics and Social Philosophy, Catholic University of America

"While the philosophical profession relies solely on the 'wing' of reason, religious faith involves accepting claims that are inaccessible to reason, even on its best day. So it is both surprising and gratifying to find that contributors to this volume claim that it was philosophy—indeed reason itself—that led them to embrace the truths of faith."
— Laura Garcia, Ph.D., Scholar in Residence, Department of Philosophy, Boston College

"In these stories of conversion, any reader will see clearly that intellectual conversions are anything but the conclusions to detached processes of reasoning; rather, they are invariably solutions to viscerally felt dissatisfaction with any explanation of our situation here on earth that does not recognize God, Jesus Christ, and the teaching authority that comes to the Church from Christ."
— Kevin Flannery, S.J., Ordinary Professor of the History of Ancient Philosophy, Pontifical Gregorian University

"In the professorate, the conventional wisdom is that beliefs arising from faith are by their very nature contrary to the deliverances of reason. But for those Catholic academics, like the contributors to this volume, who have both a deep faith and a sophisticated mastery of philosophy, that's not at all how they understand the relationship between faith and reason. They see them as complementary."
— Francis Beckwith, Ph.D., from the Foreword; Professor of Philosophy, Baylor University