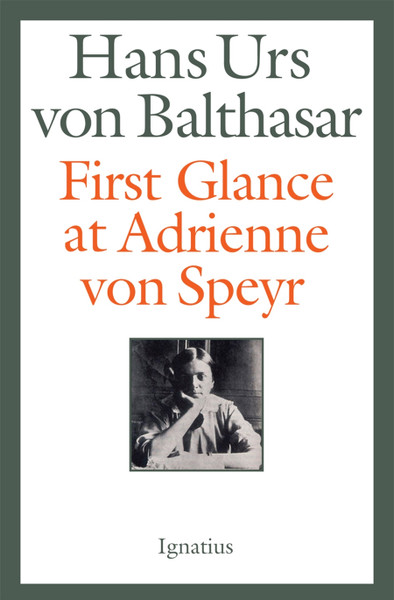 This second edition of Hans Urs von Balthasar's book on Adrienne von Speyr is his personal introduction to the Swiss medical doctor, convert, and mystic, whose message and mission he believed to be vitally important for the Church. Von Balthasar was the spiritual director of von Speyr  for almost thirty years as she progressed in the life of grace. She helped him to found the Community of Saint John, an international secular institute, and she wrote more than sixty books on various topics, including prayer, Scripture, sacraments, and saints, which continue to bear fruit for those seeking to deepen their understanding of Catholic spirituality and theology.

This book contains three main sections. The first includes a short account of Adrienne's life, which describes her childhood, conversion, and mission; an analysis of her most important theological concerns; and an overview of her published and unpublished works.  The second is a collection of enlightening statements that Adrienne made about herself, which illuminate both her exterior and interior life. The third section contains prayers that she herself wrote, which best reveal her spirit.

"On the whole I received far more from Adrienne, theologically, than she from me. As her confessor and spiritual director, I observed her interior life most closely, yet in twenty-seven years I never had the least doubt about the authentic mission that was hers. Her work appears far more important to me than mine. I am convinced that when her works are made available, those who are in a position to judge will concur with me about their value and will thank God that he has granted such graces to the Church in our time."
— Hans Urs von Balthasar

p>"Von Speyr was one of the great Catholic converts of the twentieth century. Her great passion was what might be called 'the thirst for catholicity' — the unreserved, joyful adherence to all the teachings of the Church and the attitude of total surrender to the Truth. "
— Adrian Walker, Ph.D., Professor of Theology, John Paul II Institute p>"The abundant harvest of graces hidden in this theological mission for our times still waits to be more fully carried into the storehouses of the Church for whom Adrienne von Speyr  was sent. Now, however, a century after her birth, there are many signs to indicate that the moment of her 'reawakening' is at hand!"
— Jacques Servais, S.J., Director, Casa Balthasar, Rome

"Adrienne von Speyr is one of the greatest mystics of the 20th century. Her insights into the Bible offer a treasure-trove of wisdom in an age of rabid historical-criticism, and her Trinitarian and Marian approach to theological topics counters the spirit of modernism that plagues our times."
—Fr. Donald Calloway, MIC, Author, Champions of the Rosary