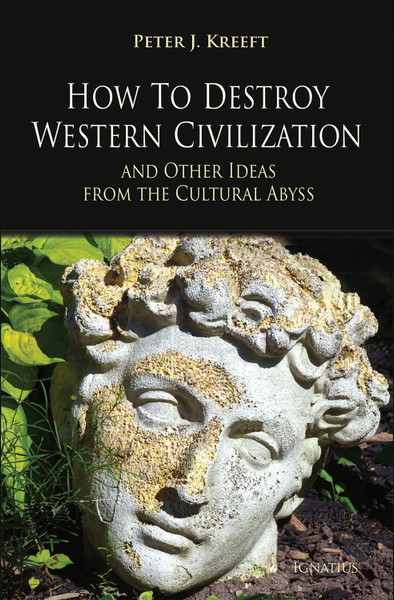 Peter Kreeft presents a series of brilliant essays about many of the problems that undermine our Western civilization, along with ways to address them. "These essays are not new proposals or solutions to today's problems," he says. "They are old. They have been tried, and have worked. They have made people happy and good. That is what makes them so radical and so unusual today."

In his witty, readable style, Kreeft implores us to gather wisdom and preserve it, as the monks did in the Middle Ages. He offers relevant philosophical precepts, divided into various categories, that can be collected and remembered in order to guide us and future generations in the days ahead.

Kreeft emphasizes that the most necessary thing to save our civilization is to have children. If we don't have children, our civilization will cease to exist. The "unmentionable elephant in the room", he tells us, is sex, properly understood. Religious liberty is being attacked in the name of "sexual liberty", in other words, abortion. Kreeft encourages us to fight back—with joy and confidence—with the one weapon that will win the future: children.

"In describing how to destroy the West, which we're doing a pretty good job of just now, Peter Kreeft also indicates how to save it, if what's left is savable. He has produced many valuable books in the course of a long career. This one, in its broad scope and incisive analysis, may be the very best of them all."
— Robert Royal, Ph.D., Author, A Deeper Vision: The Catholic Intellectual Tradition in the Twentieth Century

"If Western civilization is imploding, the sole corrective is to detonate it with love, the only reality able to move both minds and hearts truly. Dr. Kreeft does precisely this in his explosive call for a renewal of family life, of a culture aware of what it is worshipping, and of a freedom that allows humans to embrace the fullness of life for which they have been created in Christ."
— Fr. David Meconi, S.J., Director, Catholic Studies Centre, Saint Louis University; Editor, Homiletic & Pastoral Review

"A pithy, often very funny book, with a serious underlying purpose. Peter Kreeft, our very own C. S. Lewis, is a keen diagnostician of our moral and spiritual disorders—here set forth in layman’s language of common sense. He doesn't flinch or coddle. Truth is hard on those who deny it. Whether it makes you laugh or cry, this is a book to be savored and enjoyed on many levels."
— Robert Reilly, Author, America on Trial: A Defense of the Founding

"Diagnosis and prescription in one volume! Dr. Kreeft shows that the diseases destroying Western civilization are indeed deadly, but need not be fatal. While there is still time, we can remember, reclaim and discover the treasures of Western civilization that are both so divine and so thoroughly humane."
— Fr. Robert McTeigue, S.J., Author, Real Philosophy for Real People; Host, The Catholic Current on the Station of the Cross Radio Network

Idea of a University (Digital)

How and How Not to Be Happy