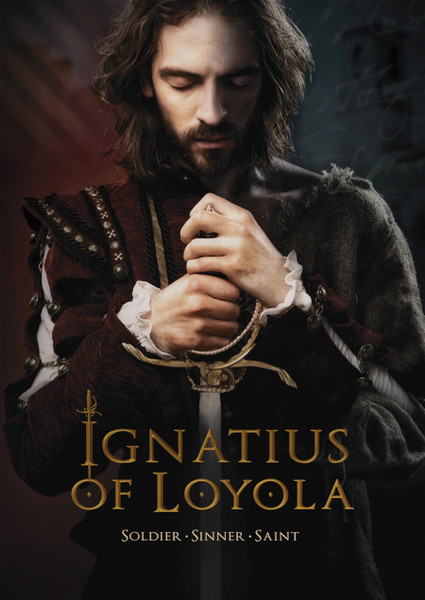 This modern and very human take on the story of St. Ignatius of Loyola, the founder of the Jesuits, often called "The Saint of Second Chances" is an incisive and thrilling look at the life of the real man behind the legend. In his lifelong quest to become the heroic knight of his fantasies, Ignatius stares death in the face again and again, having his leg shattered by a cannonball in battle; driven to near suicide by his inner demons; finding himself imprisoned, accused of being an illuminati; and finally finding his life in the hands of the Inquisition. Through it all, he would come to see the hand of God working in his life, shaping the self-obsessed sinner into the loyal and passionate soldier-saint. Widescreen

This DVD contains the following languages: English with English or Spanish subtitles.

"The movie about Ignatius of Loyola is a masterpiece. It uses the power of modern film making to show the interior greatness of a man whose mission in life was truly to conquer death itself. Seeing the spirit of this giant of a man is an experience that will command honor and triumph in a world that is losing both to demonic forces. Watching this film will bring new depth to our inner lives that seek ways to build faith and courage."
— Mother Dolores Hart, OSB,Author, The Ear of the Heart: An Actress' Journey from Hollywood to Holy Vows

p>Ignatius of Loyola is the story of an extraordinary missionary disciple of Jesus Christ. It is a stirring drama, an epic adventure, and a portrait of an intimate and profound friendship with the Lord. I was inspired by the incredible story of holiness in this movie, and you will be too."
— Most Reverend James Conley, Bishop of Lincoln, NE p>"This unusually powerful film is an instrument of grace. It goes without saying that some of its strength is due to the gripping life-story of St. Ignatius. But more than this, the acting is outstanding, and the sense of moral and spiritual struggle is completely convincing. The dialogues bring to life the essential charism of the Jesuits without lapsing into the didactic, which is often a weakness with "hagiographical" film biographies. The awe-inspiring cinematography combines with all the other elements to create a work that is profoundly moving and beautiful in every way. It will become a classic."
— Michael D. O'Brien, Author, Father Elijah: An Apocalypse

"Ignatius of Loyola was a soldier and an aristocrat. He was also a man touched by suffering from wounds of battle, wounds that prophetically taught him of the warfare surrounding the kingdom of God. This account of his early life is both gripping and moving, not to be missed."
— James V. Schall, SJ, Professor Emeritus, Georgetown University

p>"A vibrant portrayal of an amazing story of God's grace! This film captures the drama of Ignatius Loyola's conversion and surrender to God. Ad majorem Dei gloriam!"
— Fr. Joseph Koterski, SJ, Fordham University p>"An intense, riveting, and sometimes raw look at the life of Ignatius of Loyola. This provocative film holds viewers captive from the opening scene to the last, and compels them to consider their own depth of commitment to God, His Church, and their witness to others. I was impassioned and inspired to stand in the breach with Inigo de Loyola!"
— Johnnette Benkovic, Founder, Women of Grace EWTN Radio and Television Host

"The appeal of this wonderful film flows from an exceptional cast led by Andrea Munoz as Ignatius and a conversion story that rivals Augustine's and ranks among the most decisive in the history of the Church. This is a fresh, deeply engaging portrait of the Jesuits' great founder – the former soldier who became a saint."
— Most Reverend Charles Chaput, Archbishop of Philadelphia, PA

p>"An absolutely stunning portrayal of one of the greatest saints of all time! This film will inspire many to turn away from the illusory things of this world and seek to become knights of heaven and saints!"
—  Fr. Donald Calloway, MIC, Author, Champions of the Rosary: The History and Heroes of a Spiritual Weapon p>"Too often saints are presented as syrupy and other-worldly making it hard for real people to relate to them. Not this real life movie. St. Ignatius of Loyola is a manly man—a hero that real men can connect with—a lover and a warrior who takes the world in hand. Wounded in battle he struggles from the depths of his limitations. Then on that bed of sorrow and self-pity he discovers God through reading the lives of the saints. Then the story bursts forward as the warrior, now his manhood rife with meaning, takes on the world again but as a champion for Jesus Christ. Great inspirational movie for everyone, but especially the men who are saints in the rough just waiting to erupt like Ignatius of Loyola."
— Steve Ray, Host, The Footprints of God film series

"Casting a brilliant lead as "Inigo", each scene illustrates the continual conversion of one of the most momentous saints in our Church, and an invaluable leader for the Counter-Reformation. The film beautifully portrays to all Christians the enduring virtue necessary to become a constant convert and a passionate disciple of Jesus Christ, obedient to the Church He founded. Everyone who loves the saints must watch this movie now!
— Shaun A. McAfee, Founder, EpicPew.com

p>"A powerful drama that focuses on the intense spiritual journey of St. Ignatius that gave birth to the Spiritual Exercises. This epic portrayal vividly depicts Ignatius' personal struggle to seek God's will amidst the allurements of wealth, fame, and pleasure. It reveals a side of the Jesuit founder that is rarely seen but can be experienced through riveting cinematography that fully engages the mind and heart. This compelling movie will encourage you to plumb the depths of God's mercy in your own life to experience his love in a more meaningful way."
— Deacon Harold Burke-Sivers, Author, Behold the Man: A Catholic Vision of Male Spirituality p>"These days, the word epic is used to describe many things that aren't truly so. But epic is an entirely fitting descriptor for Ignatius of Loyola. Full of swashbuckling adventure, romance in the truest sense, and all the intensity of a great spiritual struggle, it is a powerful depiction of a saint's transformation from sinner to passionate knight in the service of his divine King. A superb cast, beautiful scenery, and artful cinematography make it a pleasure to watch. I have no doubt Ignatius of Loyola will become a classic enjoyed for years to come."
— Sam Guzman, Founder, The Catholic Gentleman

"Ignatius of Loyola's life was made for the big screen, and this new production captures beautifully the ongoing conversion of this soldier turned saint. Most striking is how Fr. Ignatius learned to pray in such a way that he could imagine and find the Lord Jesus dwelling in the business of everyday life. By reflecting on the experiences of his day, and then using the powers of his imagination and intellect, Ignatius came to show the world how God was to be found in all things."
— Fr. David Meconi, SJ, Editor, Homiletic & Pastoral Review

p>Ignatius of Loyola is not a simplistic children's film, not a mere biography outlining the basic achievements of the saint's life from birth to death. Here you will meet "Inigo" as a person, sharing his very human dreams, frustrations, struggles, and eventual conversion. As you experience Inigo's gradual (and often painful) journey from superficial dreams of heroic glory to the transforming reality of heroic service for the glory of God, you will be moved, inspired, and awed by the way God leads us from who we are to who He destined us to be."
— Vinny Flynn, Author, 7 Secrets of Divine Mercy

"Powerfully enthralling, entirely realistic and inspiring, Ignatius of Loyola is a must-see movie! Íñigo de Loyola, a handsome and heroic knight consumed with extravagance and the desire of glory, goes through hell and back after a devastating war injury. He reluctantly reads stories of Jesus and the saints while recuperating and is totally transformed to embrace the austere life of a beggar and contemplative, going on to spiritually instruct others, and eventually becomes one of the greatest saints of all time!"
— Donna-Marie Cooper O'Boyle, Author, The Kiss of Jesus

p>"Spectacularly recorded on location in Spain and the Philippines, Ignatius of Loyola presents a striking and pragmatic reflection of the Ignatian approach to life in the Spirit. A powerful script brought to life by talented acting that might well move you to reevaluate your approach to daily living, especially when you find yourself overwhelmed by misfortune."
— Bishop Robert P. Reed, The CatholicTV Network