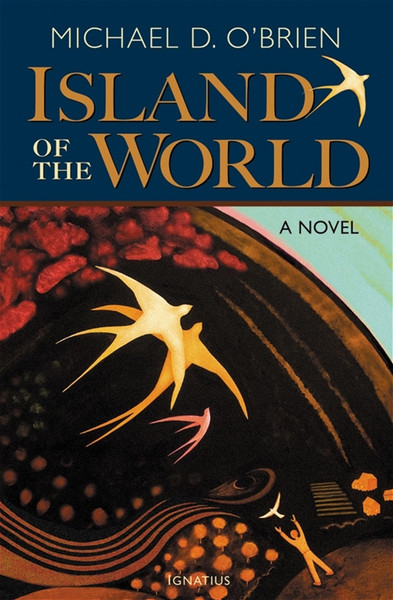 Island of the World is the story of a child born in 1933 into the turbulent world of the Balkans and tracing his life into the third millennium. The central character is Josip Lasta, the son of an impoverished school teacher in a remote village high in the mountains of the Bosnian interior. As the novel begins, World War II is underway and the entire region of Yugoslavia is torn by conflicting factions: German and Italian occupying armies, and the rebel forces that resist them—the fascist Ustashe, Serb nationalist Chetniks, and Communist Partisans. As events gather momentum, hell breaks loose, and the young and the innocent are caught in the path of great evils. Their only remaining strength is their religious faith and their families.

For more than a century, the confused and highly inflammatory history of former Yugoslavia has been the subject of numerous books, many of them rife with revisionist history and propaganda. The peoples of the Balkans live on the border of three worlds: the Islamic, the orthodox Slavic East, and Catholic Europe, and as such they stand in the path of major world conflicts that are not only geo-political but fundamentally spiritual. This novel cuts to the core question: how does a person retain his identity, indeed his humanity, in absolutely dehumanizing situations?

In the life of the central character, the author demonstrates that this will demand suffering and sacrifice, heroism and even holiness. When he is twelve years old, his entire world is destroyed, and so begins a lifelong Odyssey to find again the faith which the blows of evil have shattered. The plot takes the reader through Josip's youth, his young manhood, life under the Communist regime, hope and loss and unexpected blessings, the growth of his creative powers as a poet, and the ultimate test of his life. Ultimately this novel is about the crucifixion of a soul—and resurrection.

"You will not want to put this book down until you finish it, and you will continue to live in it even after you close its covers. This story will change you. It will make you a wiser, better person. Is there any greater, rarer success we can hope for in a mere book than that?"
-Peter Kreeft, Ph.D., Boston College. Author, The Philosophy of Tolkien

p>“It is difficult to know where to turn for noble enough analogies inspeaking of this book. Michael O'Brien has achieved both a seriousness and a delicacy, that is not to be taken lightly. I wonder whether we are going to find Mr. O'Brien's name taking its place along with those of Mauriac and Bernanos before too long?”
-Thomas Howard, author, Dove Descending: A Journey into T.S. Eliot’s Four Quartets p>"There is a kind of historical novel that may appear less a work of conventional fiction than an acute recollection of intimate personal stories, gathered secretly and then, in contemplative solitude, softly woven together with prophetic insight. When such a weave is spun on the right writerly loom, underthreaded with prayer of a mystical intensity, something far more deeply discerning than typical historical fiction can result. Island of the World offers a rich but unsettling fabric, the lovely and the terrible together, evoking not only the social tragedy and horribly tested piety of 20thC Croatia, but the fragile beauty of holiness in a time of adversity anywhere."
-David Lyle Jeffrey, author, People of the Book

“Michael O'Brien has done it again. Penetrating, incisive, lyrical and startlingly clear and crisp, this is a novel that obliges readers to think, think and think again. Unlike so many of his literary contemporaries, the author has something to say that is not only new but is intensely important. Every writer, teacher, thinker and politician should be obliged to read Michael O’Brien. If they did so, the world would be a far better place.”
-Michael Coren, author, C. S Lewis: The Man Who Created Narnia

p>“In Michael O’Brien’s new novel we feel the mystery and theology palpitating on every page without ever feeling that the deeper meaning is obstructing the momentum of the plot. The genius of O’Brien is that he does not wear his theological heart on his sleeve but lets its pulse provide the unobtrusive rhythm to which the story dances. This is storytelling at its most sublime”
-Joseph Pearce, author, Literary Converts

“Michael O'Brien's novels always have haunting plots. St. Augustine wrote, ‘You touched me, and I burned for your peace.’ Something burning is found here. Young Josip is told that the Odyssey was written about a man who longed to return home. What is our home, in this island in the world? O’Brien’s words touch us deeply in this work, by lives that seek in their very living that peace for which those who were created to live first in this island of the world are finally destined. ‘In eternity we will know fully.’ Such are O'Brien's words, such are Augustine's words."
-James V. Schall, S.J., Georegetown University. Author, The Order of Things

p>“ ‘Who are you? Where have you come from? Where are you going?’ Such questions come to our souls with new intensity through this poetic, deep story of crucifixion and resurrection, the most beautiful novel of the last 20 years since Eugenio Corti's The Red Horse. In our journey with his main character, Josip Lasta, we move toward the heart's real home. As with Homer's Ulysses, as with Tolkien's Frodo, we carry our wounds, our losses, our beloved ones and encounter the only thing we truly seek and hope for: the eyes of the One who can heal our wounds, embrace our hearts, save our deepest loves.”
-Dr. Edoardo Rialti, Professor of Literature, Florence, Italy

Schoolhouse in the Woods

The World of Saint Paul