Saint among the Hurons 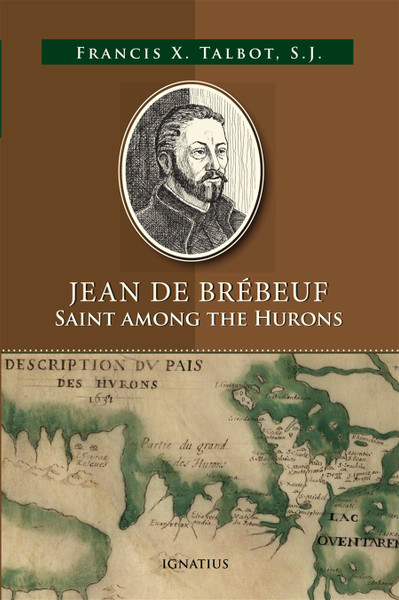 The Hurons stared at the giant young Norman, as tall and broad as they, a Jesuit priest robed in black and with a full black beard on his gentle face. He was to live among them for nineteen years, patiently and with enormous difficulty learning their ways and language. He would eat their raw bear and moose meat, paddle many months and many miles in their canoes, build his rough chapel surrounded by their long houses, and win their respect and love, leading a small band of them into the Christian faith.

At length, joined by other "Blackrobes", Father Jean de Brébeuf erected a bit of Old France, with church and stockade, in the Canadian wilderness. Yet he saw his village chapels burned, his converts shunned and tortured, and his fellow priests murdered by the Iroquois, the enemy of the Hurons. Never disturbed by fears for his own safety, he also died at their hands after incredible tortures in 1649.

This swift-paced book is more than a biography of a great saint. It is a vital chapter in the tragic history of New France in North America, a story of the failure of colonization partially redeemed by the blood of the martyrs of the Church.

"This work has the sweep and grandeur of an epic tale!"
— America

"An incredible tale of suffering, dedication and courage."
— Chicago Tribune

"Father Talbot has told Brébeuf's story in masterly fashion. It is an account marked by fluency and liveliness. Brébeuf lives in these pages."
— Catholic Transcript

"A book for everyone. The sheer story is enough to interest any reader; as a study of human nature, it is fascinating; as spiritual reading it is sublime."
— Messenger of the Sacred Heart

"What a story! The adventure of a zealous young French priest sent into the savage wilderness to convert a nation by the power of faith alone. He knew terror by night, the arrow that flies by day, the pestilence that walks in darkness, and he was not afraid."
— New York Times