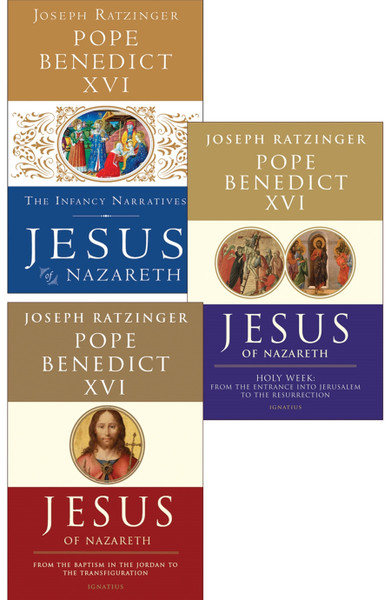 This book set can only be sold in the US

Jesus of Nazareth (Paperback)
From the Baptism in the Jordan to the Transfiguration
In this bold, momentous work, Joseph Ratzinger-in his first book written since he became Pope-seeks to salvage the person of Jesus from recent "popular" depictions and to restore Jesus' true identity as discovered in the Gospels. Through his brilliance as a theologian and his personal conviction as a believer, the Pope shares a rich, compelling, flesh-and-blood portrait of Jesus and invites us to encounter, face-to-face, the central figure of the Christian faith.

From Jesus of Nazareth: "the great question that will be with us throughout this entire book: What did Jesus actually bring, if not world peace, universal prosperity, and a better world? What has he brought?

The answer is very simple: God. He has brought God! He has brought the God who formerly unveiled his countenance gradually first to Abraham, then to Moses and the Prophets, and then in the Wisdom Literature-the God who revealed his face only in Israel, even though he was also honored among the pagans in various shadowy guises. It is this God, the God of Abraham, Isaac, and Jacob, the true God, whom he has brought to the peoples of the earth.

He has brought God, and now we know his face, now we can call upon him. Now we know the path that we human beings have to take in this world. Jesus has brought God and with God the truth about where we are going and where we come from: faith, hope, and love."

Jesus of Nazareth (Hardcover)
Holy Week: From the Entrance Into Jerusalem To The Resurrection
For Christians, Jesus of Nazareth is the Son of God, who died for the sins of the world, and who rose from the dead in triumph over sin and death. For non-Christians, he is almost anything else--a myth, a political revolutionary, a prophet whose teaching was misunderstood or distorted by his followers.

Jesus of Nazareth is the Son of God, and no myth, revolutionary, or misunderstood prophet, insists Benedict XVI. He thinks that the best of historical scholarship, while it can't "prove" Jesus is the Son of God, certainly doesn't disprove it. Indeed, Benedict maintains that the evidence, fairly considered, brings us face-to-face with the challenge of Jesus--a real man who taught and acted in ways that were tantamount to claims of divine authority, claims not easily dismissed as lunacy or deception.

Why was Jesus rejected by the religious leaders of his day? Who was responsible for his death? Did he establish a Church to carry on his work? How did Jesus view his suffering and death? How should we? And, most importantly, did Jesus really rise from the dead and what does his resurrection mean? The story of Jesus raises many crucial questions.

Benedict brings to his study the vast learning of a brilliant scholar, the passionate searching of a great mind, and the deep compassion of a pastor's heart. In the end, he dares readers to grapple with the meaning of Jesus' life, teaching, death, and resurrection.

As the Pope wrote in volume two of this series, he attempts to "develop a way of observing and listening to the Jesus of the Gospels that can indeed lead to the personal encounter and that, through collective listening with Jesus' disciples across the ages, can indeed attain sure knowledge of the real historical figure of Jesus."