A Conversation With Peter Seewald 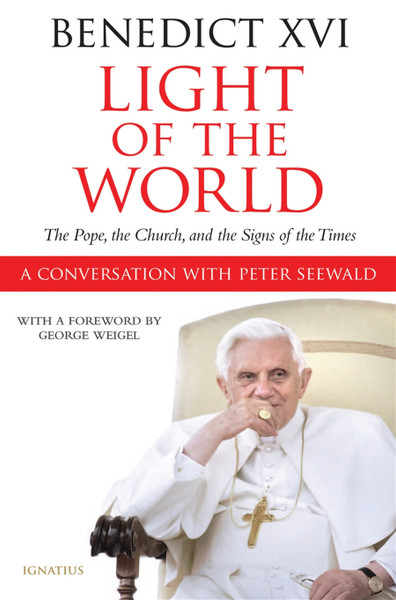 Never has a Pope, in a book-length interview, dealt so directly with such wide-ranging and controversial issues as Pope Benedict XVI does in Light of the World. Taken from a recent week-long series of interviews with veteran journalist Peter Seewald, this book tackles head-on some of the greatest issues facing the world of our time. Seewald poses such forthright questions to Pope Benedict as:

Twice before these two men held wide-ranging discussions, which became the best-selling books Salt of the Earth and God and the World. Then, Seewald's discussion partner was Joseph Ratzinger, head of the Vatican's chief doctrinal office. Now, Joseph Ratzinger is Pope Benedict XVI, the spiritual leader of the world's over one billion Catholics. Though Seewald now interviews the Pope himself, the journalist "pulls no punches", posing some of the thorniest questions any Pope has had to address. Believers and unbelievers will be fascinated to hear Benedict's thoughtful, straightforward and thought-provoking replies. This is no stern preachment or ponderous theological tract, but a lively, fast-paced, challenging, even entertaining exchange.

"The extraordinary personal and professional chemistry of Peter Seewald and Joseph Ratzinger has proven itself over the years in previous book-length interviews. Light of the World is Seewald's latest conversation with the man who is now Pope Benedict XVI -- and arguably the most compelling.  The Benedict XVI who emerges from these pages is a man of profound faith and intellect, combined with disarming simplicity, and willing to engage any issue frankly and without rancor.  For anyone interested in the future of the Church, this book is ‘must' reading."
+Charles J. Chaput, O.F.M. Cap., Archbishop of Denver

"Peter Seewald's book length interview, Light of the World, allows the reader to ‘eavesdrop' on an intimate and revealing conversation with the Vicar of Christ that reveals him to be the "humble servant in the vineyard of the Lord" that he described himself as shortly after his election to the See of Peter.
Both reader who does not count himself or herself among his flock as well as one who, like the Holy Father, calls the Church ‘Mother' can profit from engaging in this ‘conversation' with a man who continues to surprise and disarm his critics with the authenticity of his witness.  As an intellectual and as a pastor, Benedict witnesses - with great joy and unwavering hope - that God does matter."
-Archbishop Thomas Wenski, Archbishop of Miami

The World of Prayer