Rock on Which Family is Built 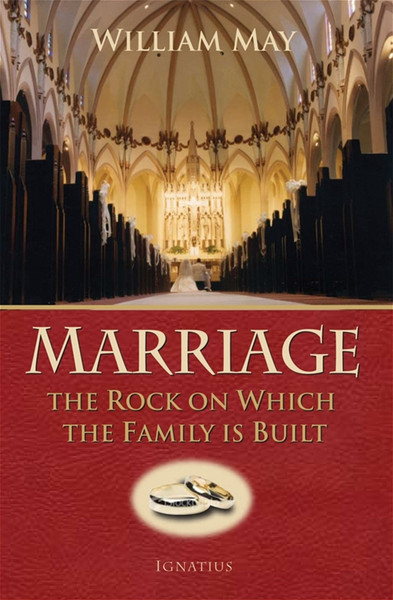 Is marriage the foundation of family life? Many people today would say, ಜNo!ಝ Others would say, ಜYes!ಝ, but they would define ಜfamilyಝ and ಜmarriageಝ in ways at odds with how the words have been used almost throughout human history. In this revised and expanded edition of Marriage: The Rock on Which the Family is Built, internationally-renowned theologian William E. May makes the case for marriageಙs foundational role for family, with marriage defined as the union of one man and one woman. Drawing on Pope John Paul IIಙs ಜtheology of the bodyಝ, he explains the person-affirming, love-enabling, life-giving, and sanctifying nature of marriage. He shows how marriage is necessarily a complementary union of man and woman and how this rules out the idea of ಜsame-sexಝ marriage.

May argues, drawing on Popes Paul VI, John Paul II and Benedict XVI, that marriage fully respects the equal dignity of husband and wife as persons, while recognizing their unique, exclusive, enduring, complementary contributions to their union. Likewise, he shows how marriage honors the truth that each new human life brought about by sexual union is a person equal in dignity to his mother and father. Whatಙs more, both reason and revelation are used to show that only the family, founded on marriage as an enduring, mutually-exclusive union of one man and one woman, provides the proper context for begetting and raising children.

Reproductive technologies are also critically examined and the author argues that human beings ought to be begotten in an act of spousal love, not made through in vitro fertilization. Furthermore, the role of the family as the ಜdomestic churchಝ, a community of holiness, is explored. This expanded edition includes new chapters: ಜಘMan and Woman He Created Themಙ: Pope John Paul IIಙs Catechesis on Human Sexualityಝ and ಜPope Benedict XVI and Marriage,ಝ the latter summarizing Benedictಙs thought on marriage, particularly as found in his first encyclical Deus Caritas Est. Also included is Pope John Paul IIಙs ಜLetter to Familiesಝ.

The Indissolubility of Marriage (Digital)