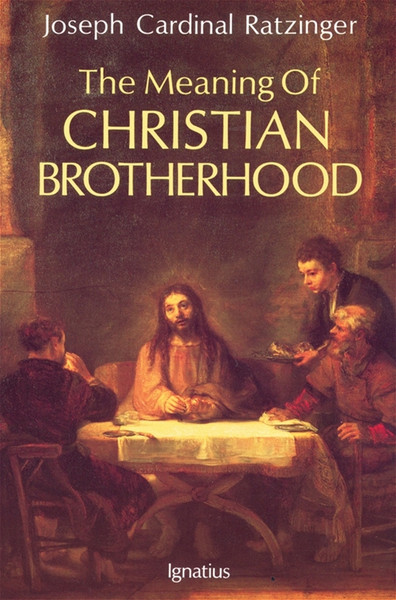 Written over three decades ago, Cardinal Ratzinger's profound treatise on the true meaning of Christian brotherhood is perhaps even more timely and important now as a clear statement on the biblical grounds for cooperation among believing Christians. In treating Christian brotherhood from the perspective of salvation history, Ratzinger opens up the meaning of both the Old and New Testament in this most essential area. After establishing the distinctively Christian sense of brotherhood (vis-À-vis Judaism, Hellenism, Stoicism, the Enlightenment, and Marxism), he shows how fraternal charity can only be perfected through God's fatherhood, Christ's divine sonship, and our brotherhood in Christ.

"The timely republication of this work opens up vistas that have been obscured recently by controversy and confusion. Cardinal Ratzinger's treatment of election and rejection is like reading the surprising solution of a mystery story. This work is even more meaningful now when disunity leads to deep conflict within the Church."
— Benedict J. Groeschel, C.F.R., Author, The Reform of Renewal

"Highly commended as a synthesis of ecumenism. It explains the author's lifelong emphasis on what unites the followers of Christ, rather than what divides them as 'separated brethren.' With no compromise of Catholic principles, it explains how 'the two communities—Catholic and Protestant' are to 'regard each other as sisters in the Lord ... and individual Christians on both sides as brothers to each other.'"
— John Hardon, S.J., Author, The Catholic Catechism

"Having read this book many times, I have found it to be invaluable in understanding the message of Scripture, the significance of the Catholic Church and Ratzinger's theology. He has captured the very heart and soul of Scripture."
— Scott Hahn, University of Steubenville

The Meaning of Tradition

Teaching and Learning the Love of God (Digital)