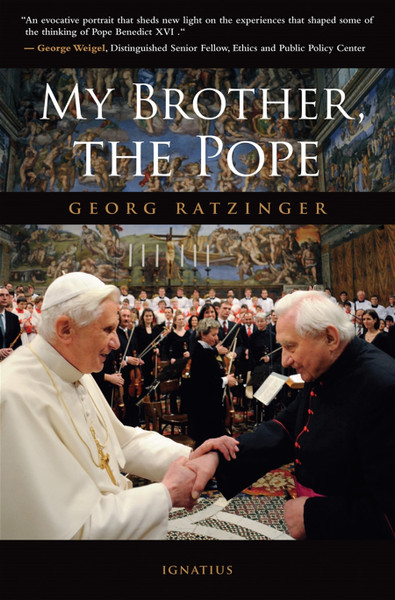 Be sure to check out the My Brother, The Pope website for more information.

It wasn't always the case that Msgr. Georg Ratzinger lived in the shadow of his younger brother, Joseph. Georg was an accomplished musician, who for over 30 years directed the Regensburger Domspatzchor, the world-famous boys choir of the Regensburg cathedral. Brother Joseph was a brilliant young professor, but mostly known in German academic circles.

Now Georg writes about the close friendship that has united these two brothers for more than 80 years. This book is a unique window on an extraordinary family that lived through the difficult period of National Socialism in Germany. Those interested in knowing more about the early life of Benedict XVI will not be disappointed. They will also learn of the admirable character and inspiring example of the parents, and see how the Catholic faith can shape not just a family, but an entire culture-in this case, that of Bavaria.

Georg's reminiscences are detailed, intimate, and warm. And while they begin with the earliest years of the Ratzinger family, they continue right up to the present day.

This is not simply a book to satisfy curiosity about a "celebrity", though it certainly does that. It's a beautiful portrait of Catholic family life and, in the most literal sense, of enduring fraternal charity. Georg has a talent for telling a story, and the co-author fills in some of the larger historical background. The many photographs, both in black and white and in color, round out a thoroughly enjoyable and inspirational book. Illustrated with 47 photographs.

"Msgr. Georg Ratzinger's evocative portrait of the Bavarian Catholicism in which he and his brother, the future pope, were raised, offers 21st century readers an intimate glimpse of a lost world that clearly lives on in the minds and hearts of a great musician and a great theologian. The scenes sketched so ably by Msgr. Ratzinger also shed new light on the experiences that shaped some of the thinking of Benedict XVI about the reform of the Church and the future of Europe."
- George Weigel, Distinguished Senior Fellow, Ethics and Public Policy Center

p>"I have no hesitation in saying that My Brother the Pope is not just a fascinating book but a unique one, as well.  In its pages we are shown not just a Pope, a Cardinal, or even a great theologian; we are granted an intimate look at the life of one beloved brother through the eyes of another. Here we come to know the world that formed Pope Benedict XVI, from the gentle love of his deeply Catholic Bavarian family to his struggles with the brutal Nazi regime that ruled his country during his youth.  Anyone who reads this book from beginning to end will truly come to know and admire the man who is now Pope Benedict XVI."
- Fr. Benedict Groeschel, Author, Arise from Darkness

"In My Brother, the Pope, Msgr. Georg Ratzinger, brother of Pope Benedict XVI, gives remarkable testimony to the inestimable role of parents and family in the life of a young man called to the priesthood. The careful and rich account of the life of the family of Joseph and Maria Peitner Ratzinger, provided by their second child and eldest son Georg, permits the reader to see directly how God works through the family in calling a young man to the priesthood. The family assists him in responding to the priestly vocation and accompanies him, as both priest and son or brother, throughout a lifetime.

Georg Ratzinger has, in a most special way, provided the world with a treasured means to understand more deeply God's great gift of its universal shepherd, Pope Benedict XVI, who remains always his brother."
- Cardinal Raymond Burke, Prefect of the Supreme Tribunal of the Apostolic Signatura

p>"Nobody knows the Holy Father better than his brother, as is evident in this heartwarming and engaging memoir. On the one hand, Monsignor Ratzinger offers an intimate portrait of the Pope's family life, granting us privileged access to the inner sanctum of Pope Benedict's childhood and youth; on the other hand, the chilling accounts of life in Germany during the rise and fall of the Nazis are nothing short of startling. Pope Benedict is not likely to write his autobiography; in its absence, this is the next best thing."
- Joseph Pearce, Author, Solzhenitsyn: A Soul in Exile