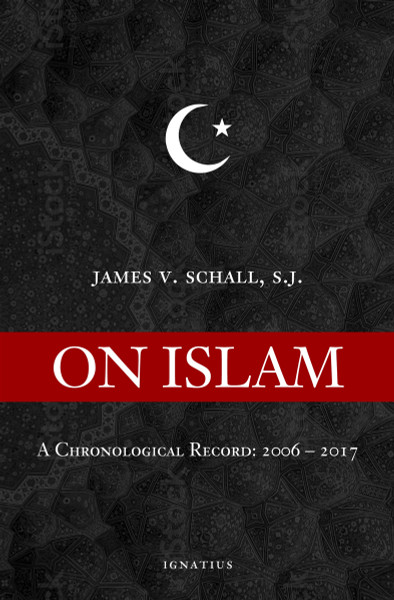 From Paris to San Bernardino, from Orlando to Manchester the Western world has been rocked by shocking mass murders done in the name of Islam since the attack on the World Trade Center and the Pentagon in 2001. This chronology of these and other key events, from 2002 to 2018, offers an opportunity to analyze the ongoing conflict between Islamism and the West.

Author Fr. James V. Schall, S.J., a renowned political philosopher, discusses the difficulty that Europeans and Americans have in recognizing that resurgent Islamic militancy is not just caused by "terrorists", as if terrorism were some kind of independent movement or mind-set. Violence has a source. No one undertakes it without a cause that is worth, in his mind, the risk of death.

Islam is unique in its description of the world within itself, which is to live peacefully by the law of Allah, and the world outside this sphere, which is at war with Islam. The main concern of the author is the abiding existence of Islam over time and its constancy in attempting to achieve the goal of worldwide submission to Allah as a political and cultural fact.

"In contrast to the current wishful thinking about Islam, Fr. Schall provides a clear and realistic picture of what Islam is and what we must know about it. Schall shows us Islam as Muslims understand it, not as we would like it to be. On Islam is a must read for Catholics who seek a fuller understanding of current events and future threats."
— William Kilpatrick, Ph.D., Author, Christianity, Islam, and Atheism: The Struggle for the Soul of the West

"Fr. Schall has always been inimitable and indefatigable; in addressing recent events and Islam, he is also courageous and forthright. His unique knowledge of political philosophy, history, theology, and current events can be seen in every page of this important and timely book."
— Carl E. Olson, Editor, Catholic World Report

"Islam remains an enigma to those who grew up in the West. Fr. Schall unravels the fundamentals of Muslim theology with refreshing brevity and clarity. His insights into Islamic philosophy are profound, yet sobering."
— Derya Little, Author, From Islam to Christ

"The kind of problem Islam presents —indeed, even why it is a problem —remains a mystery to intellectuals who rest content with superficialities regarding the supposed commonality of the three 'Abrahamic religions'. If you want to know why Islam is not just another religion, read this book."
— Robert Reilly, Author, The Closing of the Muslim Mind

"This probing, thoughtful book refutes numerous false assumptions common today in the Catholic Church and the world at large. It is an antidote to the prevailing fog of disinformation and misinformation that clouds the discourse on this increasingly important issue."
— Robert Spencer, Author, The Truth about Muhammad

"Fr. Schall's book is not just another polemic in the category of international events. It is a sober treatment of the recent history of a stripe of brutality that locates its origins in the teachings of Islam. Fr. Schall lays bare Islam's internal contradictions; he exposes the modern world's uncritical acceptance of these contradictions, and he makes plain the grave consequences of that uncritical acceptance."
— Christopher Check, President, Catholic Answers