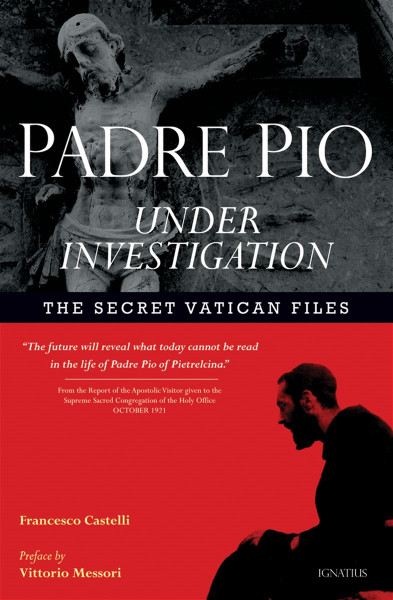 On June 14, 1921, a priest knocks at the convent in San Giovanni Rotondo. He is in his early forties and wears a simple cassock, but he is no ordinary priest. He is Bishop Raffaello Carlo Rossi, future cardinal and the Apostolic Visitor sent by the Holy Office to investigate secretly Padre Pio.

The Bishop Inquisitor remains with the Capuchin Brothers for eight days, interrogating and recording depositions. He also interviews Padre Pio himself and examins the mysterious wounds of Christ that he bears on his body.

After gathering all the evidence, the Inquisitor sketches his own evaluation of Padre Pio, which includes his reasons for believing that the stigmata are of divine origin. He sends his report and the depositions to Rome, where they stay buried for nearly a century. Now, forty years after the saint's death, these exceptional documents are published in their entirety, thanks to the skillful research of Father Francesco Castelli.

The documents in this book reveal every aspect of Padre Pio's life from his amazing supernatural gifts to his health. In his depositions, he admits, under oath, to the phenomenon of bi-location and to other supernatural charisms, and for the first time tells the detailed story of his stigmatization. Also included are letters from his spiritual father and a chronology of his life. Illustrated with black and white photos.