The Story of Patrick Peyton 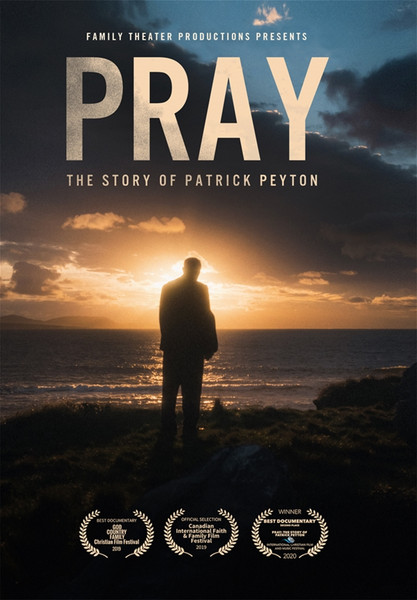 This beautifully filmed, deeply inspiring documentary chronicles the life of a poor, uneducated Irish immigrant who journeys to America in 1928 hoping to become a millionaire. Instead, he is miraculously healed of tuberculosis through the intercession of Our Lady, becomes a Holy Cross priest and spends his life inspiring millions to experience the power of prayer, especially the family Rosary. We see Father Peyton’s amazing years in Hollywood, where he enlists numerous iconic stars of his day — Bing Crosby, Maureen O’Hara, Jimmy Stewart, Grace Kelly, and many more — to create radio dramas and TV specials that spread his famous message, “The family that prays together stays together.”

Then Father Peyton takes to the globe, gathering millions at massive Rosary rallies worldwide, to hear his moving message of family unity through prayer. Filmed on location from Hollywood to Ireland, this is the incredible story of a tireless missionary and modern Marian apostle, an unlikely hero, and one of history’s greatest advocates for family prayer and the power of the Rosary. Father Peyton died in 1992 and was declared "Venerable" by the Church in 2017 as his cause for canonization continues in Rome.

With your DVD order of "PRAY" you will receive a FREE copy of the new comic book about the life and legacy of Father Peyton  - THE TALE OF PATRICK PEYTON. While quantities last! (cover image above)

“This film exemplifies the massive power of prayer. Fr. Patrick Peyton was and forever will be among the finest warriors for Christ.”
- Tom Aceto, United States Navy SEAL

“A must-see! PRAY is a reminder of how God can accomplish great things with the most unlikely of servants. It will inspire you and vividly demonstrate the efficaciousness of prayer.”
- Drew Mariani, Host of The Drew Mariani Show, Relevant Radio

“PRAY is an achingly beautiful documentary crafted by masters of the genre. From the alternately lilting and joyous soundtrack to the sound bites of Fr. Peyton’s impassioned preaching at his famous Rosary Rallies, you will be drawn into the singular spirit of a man in love with God and Mary like no other."
- Sister Helena Burns, F.S.P., Movie Critic

“PRAY celebrates the gift of intimacy from prayer when Father Peyton yielded his powerlessness and hopes to the Blessed Mother and then devoted his life to helping others enter into this intimacy. A great family movie and an inspiring resource for Christian parents."
- Carolyn Woo, Former President and CEO, Catholic Relief Services

Jesus, Teach Us To Pray