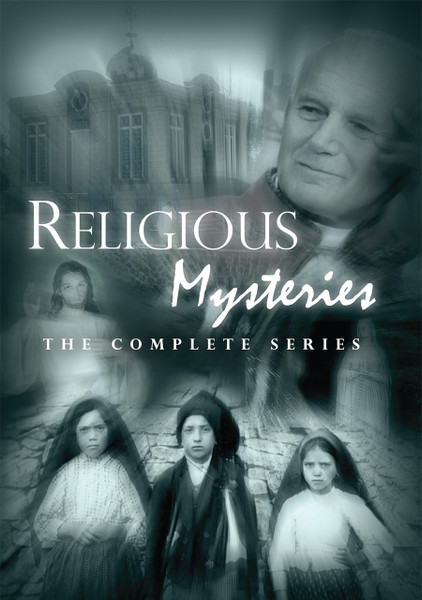 This six-part documentary film series presents investigations into intriguing mysteries connected with the stories and history of famous Catholic saints, apparitions, and holy places, and the amazing findings from these studies. Each film is 50 minutes.

The Secret of Bernadette
Explores the apparitions of Our Lady of Lourdes to Bernadette Soubirous in 1858, the secret of Bernadette’s great holiness, and the mystery of her beautiful, incorrupt body. It also reveals the amazing link between the visions of Lourdes, of St. Catherine Laboure, and the Miraculous Medal Shrine in Paris.

The Pope of Mercy
Tells the story of the deep relationship between St. John Paul II and St. Faustina, whose visions were the origin of the worldwide diffusion of the Divine Mercy devotion. The two never met, yet their stories are so profoundly intertwined that they significantly marked the entire pontificate of Karol Wojtyla.

The Lost Ark
Journey to Ethiopia in search of the Ark of the Covenant carried, according to legend, from Jerusalem to Axum by Menelik, son of the Queen of Sheba and King Solomon. The Ethiopians have claimed for centuries to have this most sought-after relic in history, housed in the Church of Our Lady of Zion.

The Road to Compostella
The fascinating story of St. James, first martyr of the Apostles, whose remains were brought to Compostella. This film also tells about the famous ancient pilgrimage route to the Shrine of St. James in Compostella, Spain, travelled today by hundreds of thousands of pilgrims every year.

Children of the Prophecy
Investigates the prophetic apparitions of Mary at Fatima, Portugal, and the many mysteries, and the “secrets”, linked to the visions of Our Lady in 1917 by the three shepherd children. The film has fascinating footage and many extraordinary images connected with the powerful story of Fatima.