In the Company of a Man in Search of God 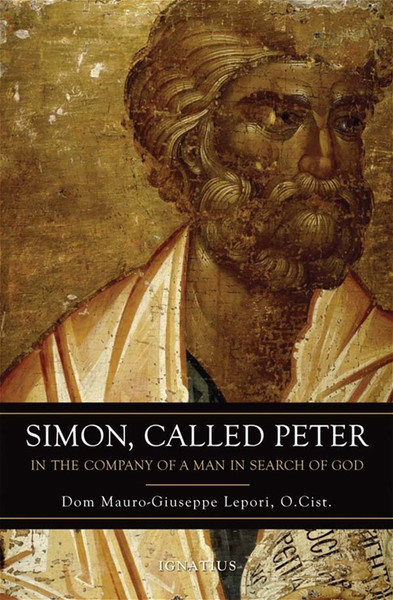 "At every stage of my life as a man, a Christian, a monk, an abbot, I have found Saint Peter to be a companion to walk ahead of me... Peter is the Gospel saint who is more 'us' than any other, closer to our own humanity, yet so close to Christ. Peter is the one we can always follow."
— Dom Mauro-Giuseppe Lepori

Simon Peter, the fisherman who was both attracted to Jesus and repelled by his own weakness, who in faith walked on the water and in fear began to sink; the ardent disciple who promised to die for His Lord and then moments later betrayed Him, who needed to reaffirm his yes to God over and over again, even unto a martyr's death: Is this not a model for many of us who desire to love and trust the Lord completely, yet who struggle daily to pick up our cross and follow Him?

Abbot Lepori's meditation on the relationship between our Lord and Saint Peter invites us to consider our own relationship with Christ. As he imaginatively retells the well-known stories from the Gospels, he revivifies them and makes them present to us, deepening our understanding of the calling we have received from Jesus and strengthening our confidence that the Lord will, indeed, bring to completion the work of love He has begun in us.

"You are carried into the events narrated here... and you see them with your own eyes and heart, more than if you had been there."
—from the Foreword by Cardinal Angelo Scola, Patriarch of Venice

Dom Lepori's account of Peter reminds us of just how often this first of the Apostles appears in the Gospels. When we see Peter spelled out in his encounters with Christ, we realize that this 'Rock' is being formed, but also that he was someone who could be formed. It is not without interest that the Church is founded on Peter, a solid man, yet also a sinner. With Lepori's guidance, we realize that Peter's life is a portrait of how God deals with men. We cannot but be moved by this Peter, a man like unto us, sin included, but a brave man who acknowledges, who learns, who, in the end, is 'the Rock' that he was called to be from the first time Christ saw him.
— James V. Schall, SJ, Author, The Order of Things

Called to Be the Children of God

Called to Be the Children of God