The Case for Jesus 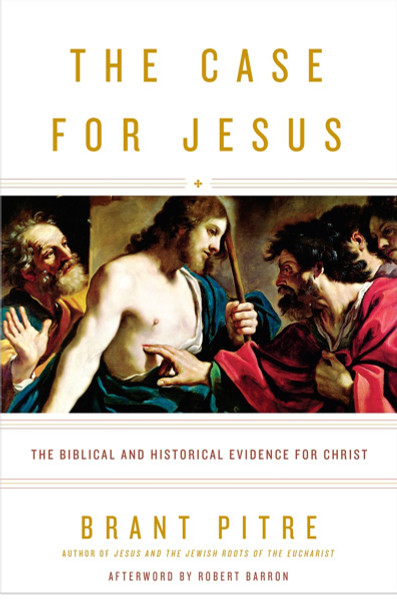 The Case for Jesus

"This book will prove to be a most effective weapon… against the debunking and skeptical attitudes toward the Gospels that are so prevalent, not only in academe, but also on the street, among young people who, sadly, are leaving the Churches in droves." – Robert Barron, author of Catholicism

For well over a hundred years now, many scholars have questioned the historical truth of the Gospels, claiming that they were originally anonymous. Others have even argued that Jesus of Nazareth did not think he was God and never claimed to be divine.

In The Case for Jesus, Dr. Brant Pitre, the bestselling author of Jesus and the Jewish Roots of the Eucharist, goes back to the sources—the biblical and historical evidence for Christ—in order to answer several key questions, including:

As The Case for Jesus will show, recent discoveries in New Testament scholarship, as well as neglected evidence from ancient manuscripts and the early church fathers, together have the potential to pull the rug out from under a century of skepticism toward the traditional Gospels. Above all, Pitre shows how the divine claims of Jesus of Nazareth can only be understood by putting them in their ancient Jewish context.

"I've lost count how many times I've heard critics say the Gospels are late, anonymous, and untrustworthy sources that don't prove Jesus was divine. At last there is a book that meticulously refutes these claims with an engaging discussion of the real Jesus that will benefit both scholars and laymen who read it."
— Trent Horn, author of Answering Atheism

p>"Thanks to Dr. Pitre's magnificent book, you will now be equipped to make the case for Jesus and the veracity of the Gospels to even the most ardent skeptics. Perhaps more importantly, you will find your own faith reawakened."
— Jennifer Fulwiler, radio host and author of Something Other Than God p>"In The Case for Jesus, Pitre breaks his research down, in typically accessible prose, to bring us a readable and fascinating account of how questioning one accepted academic idea put him on a path of discovery that served to strengthen, not sever, his faith. Readers who loved Jesus and the Jewish Roots of the Eucharist will come away from this book with a similar sense of gratitude for such a faith-affirming presentation, and also a bit of awestruck wonder at how faith and reason can complement each other so well, when allowed to. I loved this book!"
— Elizabeth Scalia, Author of Strange Gods: Unmasking the Idols in Everyday Life and Little Sins Mean a Lot

"Brant Pitre, who has already demonstrated his brilliant scholarship in earlier works, explains here in remarkably easy-to-understand ways why we can trust the Gospels. Behind his effective communication, however, is wide-ranging research and careful rethinking. In fact, this book has given me a number of important new matters to consider myself."
— Craig S. Keener, Asbury Theological Seminary

p>The Case for Jesus topples the naïve skepticism that too often dominates the study of the Gospels by showing that the evidence for the truth of the Gospels is far stronger than is often assumed. Pitre has a unique talent for putting scholarly work of the highest caliber into an accessible and engaging form. This book should be on the shelf of every homilist, catechist, and Bible study leader."
— Mary Healy, Sacred Heart Major Seminary p>"Brant Pitre does a stellar job setting forth a robust and rock solid case for Jesus. The sensationalistic claims of super-sceptics are exposed as a sham as Pitre provides a meticulous presentation of the evidence about the reliability of the Gospels, who Jesus thought he was, and what he means today. A balanced, sensible, and measured book that counters the spate of hyped-up conspiracy theories that do the rounds. An informative and enjoyable read."
— Michael F. Bird, Ridley College, Melbourne, Australia.

"In this important book, one of America’s most brilliant young scholars wrestles with issues of profound importance concerning Jesus and his identity. Pitre, in a lively and direct manner informed by up-to-date scholarship, presents a case for Jesus as the divine Son of God, fully human and fully God. Along the way he bursts some scholarly bubbles and sets a much needed cat amongst the proverbial pigeons. A delight to read!"
— Chris Tilling, King's College, London

p>"Like a room full of stale air, the popular-level conversation about Christian origins could use an open window or two. Thankfully, we now have one in Brant Pitre's Case for Jesus. Personable, accessible, engaging – all supported by top-notch scholarship. Read it."
— Nicholas Perrin, Dean of the Wheaton Graduate School

The Nativity of Jesus

The Gaze of Jesus

Jesus and the Jewish Roots of Mary

Jesus and the Jewish Roots of the Eucharist

Introduction to the Spiritual Life