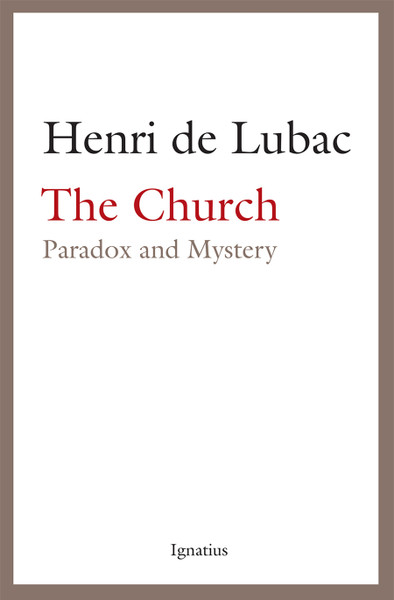 The Church: a body so diverse, so manifold, often so divided, that one struggles to define her, to see her face. "If I seek a glimpse of her, where will I find her?" asks theologian Henri de Lubac, S.J.

In these reflections written at the end of Vatican II, de Lubac—who played a key role at the Council yet was leery of rapid reform—searches out the wrinkled, mysterious beauty of the Church he loves as his mother.

The Catholic Church is such a paradox, a unity of opposites, that many are scandalized—a fact from which de Lubac does not shrink: "I am told that she is holy, yet I see her full of sinners.... I am assured that she is universal, ... yet so often I note that her members, as if by fate, huddle timidly together in closed enclaves, just like human beings everywhere.” But her distinctive beauty, when he beholds it, leaves him floored, "this beauty most rare, most improbable, most disconcerting ... not the complete achievement of human perfection, ... but a strange and supernatural beauty opening unknown vistas to me."

These seven brief studies on the mystery of Christ's Church illuminate the documents of Vatican II and offer nourishment and clarity to those confused by turbulence or hypocrisy among Christians. De Lubac, who was made a Cardinal by Pope John Paul II before his death in 1991, reflects deeply on the nature of authentic holiness in the modern world and argues that sainthood is not only possible but already—through the work of the Holy Spirit—quite alive amidst all the storms, whether in his time or in ours.

"We live in a time in Catholicism's history when the disorientation of the immediately post-Conciliar epoch has returned with a vengeance - despite all the contrary efforts of the theologians of 'ressourcement' and the representatives of the more recent Thomas revival. So this is an excellent moment in which to launch again these essays, which both draw on and embody Henri de Lubac's profound sense of the Church."

"Henri de Lubac was wounded in World War I and lived long enough to witness the cultural revolution of the 1960s and the accompanying post-Conciliar trauma. He opposed the iconoclasm and cultural vandalism that justified itself under the mantra of "aggiornamento." In his essays, including those in this work, he offered a rich ecclesiology and hence a 'road-map' out of the wilderness in which the Church now finds herself. This book could not be more timely and will be consoling and inspirational for both faithful priests and laypeople."