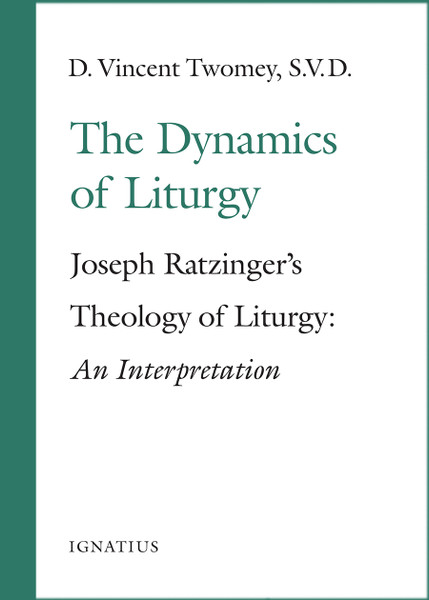 The Dynamics of the Liturgy is a constructive critique of the post–Vatican II liturgical reform through the lens of Joseph Ratzinger's liturgical and sacramental theology—written by a former student of the great pope emeritus. For Ratzinger, liturgy is the oxygen of the sacraments, and his sacramental theology, still largely unknown, is the key to understanding his theology of liturgy.

This work highlights the specifically ritual dimension of liturgy, and the significance this has for Pope Benedict XVI's proposed "reform of the reform". Father Vincent Twomey warns that the Ordinary and Extraordinary Forms of the Roman Rite—which Pope Benedict XVI had promoted to enrich liturgical practice—are dangerously drifting apart rather than, as the pope emeritus intended, complementing each other as part of an authentic renewal of the liturgy.

"A tribute by an eminent Irish theologian to his more eminent teacher and mentor. This book is the best treatment I've seen of Benedict's sacramental theology, which is, in a sense, the key to restarting the 'reform of the reform'"
— Scott Hahn, Ph.D., Professor of Biblical Theology, Franciscan University; Author, Rome Sweet Home

"Steeped in the Christian tradition and western learning, particularly German scholarship, Father Twomey is ideally suited to take us to the liturgical writings of Joseph Ratzinger, pope and scholar, the John Henry Newman of our time. Pope Benedict's 'reform of the reform' is stalled, but Twomey's learned analysis shows why it will return."
— George Cardinal Pell, Archbishop Emeritus of Sydney, Australia; Author, Prison Journal

"A faithful presentation of Benedict XVI's vision of a richer liturgical life for the People of God. Like his teacher Ratzinger, Father Twomey does not shy away from danger zones, including the controversial Amazon Synod of 2019 and the experiment of a duality of forms throughout the Latin church."
— Fr. Aidan Nichols, O.P., Author, Looking at the Liturgy

"Father Twomey is one of the foremost authorities on the theology of Joseph Ratzinger. He walks the reader across the bridge between Ratzinger's fundamental theology and his liturgical theology, and as a missionary, he speaks with considerable authority about the nature of ritual and worship in missionary countries. Few commentators on Ratzinger's theology approach their subject with Twomey's breadth of cultural experience."
— Tracey Rowland, Ph.D., St. John Paul II Chair of Theology, University of Notre Dame (Australia)

"A much-needed orientation for everyone interested in Benedict XVI's views on liturgy. Father Twomey has a superb command of German and is thus able to share untranslated primary texts. He convincingly shows Ratzinger dynamizing the liturgical concerns of the Second Vatican Council."
— Father Emery de Gaal, Ph.D., Chairman and Professor of Dogmatic Theology, Mundelein Seminary

Looking At the Liturgy (Digital)