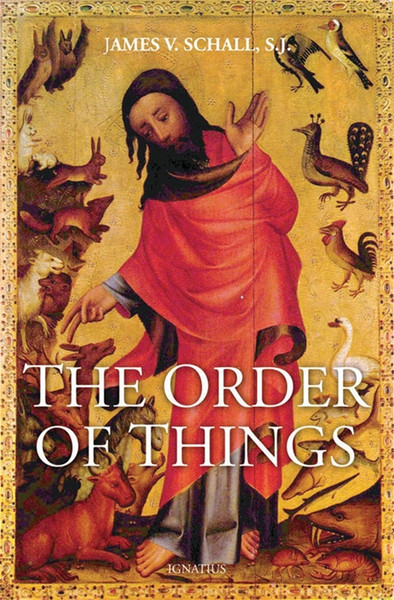 Father James Schall, the well- known author and professor of philosophy at Georgetown University, inquires about the various orders found in the cosmos, the human mind, the human body, the city, and he seeks to reflect upon the unity of these orders.In a world in which the presence of reason and order are denied � presumably in the name of science � in favor of chance explanations of why things are as they are, it is surprising to find that, in the various realms open to the human intellect, we find a persistent order revealed. At first sight, it may seem that this reality can be explained by chance occurrence, but after a point, there is a growing sense that behind things there is, in fact, an order. This order can be traced in the many areas that are open to the human mind. As Aquinas has noted, the order within the cosmos points to an order outside of it, since the cosmos cannot be the cause of its own internal order.

Philosophers have long inquired about the curious fact that the order of things implies not a mere relationship of one thing to another, but a hint that the universe is created with a certain superabundance. Why is the universe, and the things within it, not only ordered but, ordered with a sense of beauty?

Not only is there an order in things, but also the human mind seems attuned to this order as something it delights in discovering. This relationship implies that there is some correspondence between mind and reality. What is the relationship between the mind and reality? The Order of Things explores this question. Relying on common sense and the experience available to everyone, Schall concludes that it requires more credulity to disbelieve in order than to experience it. Finally, Schall explores the fundamental cause of order, what it is like? Having looked at the order of the created universe, it is not surprising that the revelation of the Godhead is itself ordered in terms of an inner relationship of Persons.

"Here is a book about everything, the subject which just happens to be the most neglected in our narrow-minded, short-sighted world. Fr. Schall takes on heaven and hell and everything in between. And his clear-thinking sparkles in his clear-writing. A painless and praiseworthy way to sweep out any confusion and muddled ideas that may be lurking in your head."
— Dale Ahlquist, Author, Common Sense 101: Lessons from G .K. Chesterton

"Father James V. Schall is one of the few renaissance men still among us. His knowledge of various areas of reality and human endeavor is encyclopedic. Dealing with important abstract ideas, he is able to put flesh on them so that the ordinary reader can grasp easily what he is getting at. Schall is the apostle of truth and reality, since he is always reminding the reader to consult that which is."
— Kenneth Baker, S.J., Editor, Homiletic & Pastoral Review

"After reading James V. Schall's The Order of Things, I have been sorely tempted to give up teaching and simply tell my students to read Schall. This little work is a virtual ratio studiorum of higher education in the finest sense. Its wisdom towers over the current intellectual scene with a common sense sanity that is intoxicating. It is Schall at his best."
—Peter A. Redpath, Professor of Philosophy, St. John's University