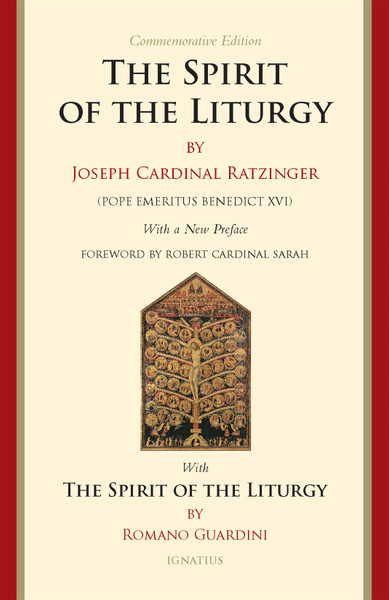 In honor of its fortieth anniversary (1978–2018), Ignatius Press presents a special Commemorative Edition of one of the most important works written by Joseph Ratzinger, The Spirit of the Liturgy.

This edition includes the earlier classic work with the same title by Servant of God Romano Guardini, a book that helped Ratzinger to "rediscover the liturgy in all its beauty, hidden wealth and time-transcending grandeur, to see it as the animating center of the Church, the very center of Christian life".

Considered by Ratzinger devotees as one of his greatest works, this profound and beautifully written treatment of the liturgy will help readers to deepen their understanding of the"great prayer of the Church". The cardinal discusses fundamental misunderstandings of the Second Vatican Council's intentions for liturgical renewal, especially about the priest's orientation of prayer to the Father, the placement of the tabernacle in churches, and the posture of kneeling.

Other important topics are the essence of worship, the Jewish roots of Christian prayer, the relationship of the liturgy to time and space, sacred art and music, and the active participation of the faithful in the Mass.

"It gladdens me, of course, that the editor wishes to celebrate the fortieth anniversary of his publishing house with a new edition of my book The Spirit of the Liturgy. . . . I am also glad to know that Ignatius Press intends to publish a small programmatic writing of Romano Guardini's entitled The Spirit of the Liturgy. This is as well the book that for me personally opened the door to the understanding of the liturgy, which is why I retained Guardini's title for my own book."
— Pope Emeritus Benedict XVI, from the new Preface

"How much we owe Cardinal Ratzinger for what has come to be known as 'the new Liturgical Movement'. How much the English-speaking world, and beyond, owes Ignatius Press for making Cardinal Ratzinger's writings on the sacred liturgy available, writings that have truly become beacons lighting the path for that 'movement toward the liturgy and toward the right way of celebrating the liturgy, inwardly and outwardly', which I believe is growing and steadily advancing even today. . . . The Spirit of the Liturgy is a singularly rich resource and guide in our day, as are the other personal liturgical writings of the Pope Emeritus Benedict XVI, and indeed his liturgical magisterium as Supreme Pontiff which retains its validity."
— Robert Cardinal Sarah, from the Foreword; Prefect of the Congregation for Divine Worship and Author of The Power of Silence

"[My] basic intentions coincide with what Romano Guardini wanted to achieve. . . .The only difference is that I have had to translate what Guardini did at the end of the First World War, in a totally different historical situation, into the context of our present-day questions, hopes, and dangers. I am not attempting, any more than Guardini was, to involve myself with scholarly discussion and research. I am simply offering an aid to the understanding of the faith and to the right way to give the faith its central form of expression in the liturgy."
— Joseph Cardinal Ratzinger, from the original Preface

The Seven Gifts of the Spirit of the Liturgy (Digital)

The Seven Gifts of the Spirit of the Liturgy