Clarifying the Facts and the Causes 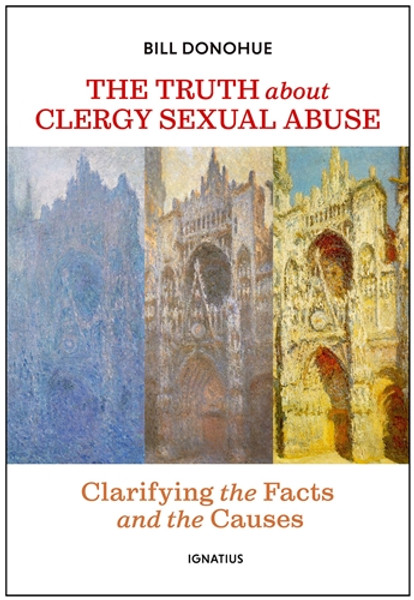 This work unpacks the history and root causes of the clergy sex abuse scandals in the United States. Building on decades of data and research, author Bill Donohue, who holds a doctorate in sociology, tells the story from a fresh angle and calls us to rethink our assumptions about the Church's handling of these horrific abuses.

The Truth about Clergy Sexual Abuse challenges many myths about the scandals, demonstrating that the abuse of minors is a problem that haunts virtually every institution—religious and secular—where adults interact with young people. The work also provides compelling evidence of the great progress that the Church has made in preventing abuse, contrary to public perceptions. Indeed, the media, Hollywood, and activist lawyers have poisoned the public mind with tales of old cases, giving the impression that nothing has changed.

Donohue investigates at length the central role that homosexuality played in the scandal. While homosexuality does not cause sexual abuse, the prevalence of emotional and sexual immaturity among homosexual clergy explains why they committed most of the molestation. Indeed, all of the educational institutions of the Catholic Church, including the seminaries, have been affected by the sexual revolution that began in the 1960s, and this book explores the pernicious effects of dissent from Catholic sexual morality.

"Using his sharp skills as a sociologist, Bill Donohue offers the public a startling autopsy of the clerical sex abuse crisis. Within, he challenges long-standing narratives about the progress made and the root causes of these crimes. This is an important work that will surely stir debate and hopefully lead to a substantive conversation about protecting children across society."
— Raymond Arroyo, EWTN Host, The World Over

"Rejecting the politically correct attempts to dismiss the truth of aberrant same-sex behavior by priests with adolescent boys, Donohue draws upon national data to indict several Church leaders for their duplicity and destroys the media narrative that the Catholic Church is unique among other social institutions in its sexual scandal."
— Anne Hendershott, Director, Veritas Center for Ethics in Public Life, Franciscan University of Steubenville

"Bill Donohue speaks the truth and is fearless in speaking it. He provides a compact, comprehensive, and painfully candid account of the scandal of clergy sex abuse and cover-up, as well as its exploitation by a cast of characters bent on serving their own interests at the expense of the Church. Indispensable reading for anyone who wants to know the facts about far and away the worst disaster in the history of American Catholicism."
— Russell Shaw, Author, Eight Popes and the Crisis of Modernity

"Donohue writes with a combination of penetrating intellect and relentless pugnacity. A great strength of the book is that it advances its arguments with competent social science analysis. Facts and claims are extensively cited and judiciously evaluated, attaining high standards for scholarship and sourcing."
— Fr. Paul Sullins, Emeritus Professor of Sociology, Catholic University of America

"Donohue demonstrates that the monumental scandal of the sexual abuse of minors by priests and bishops was the result of the collapse of the Church's defense of her own moral teachings. The tolerance, and in some cases the promotion, by Church authorities of a homosexual subculture in the priesthood opened the floodgates. Donohue's book helps make sense of how we arrived at this point, and what must be done to promote the truth and restore order in the Church."
— Fr. Gerald Murray, Canon Lawyer; Pastor, Holy Family Church, New York, New York

Abuse of Language, Abuse of Power

The Truth About Homosexuality