A Thoughtful and Compassionate Guide to Today's Most Controversial Issue 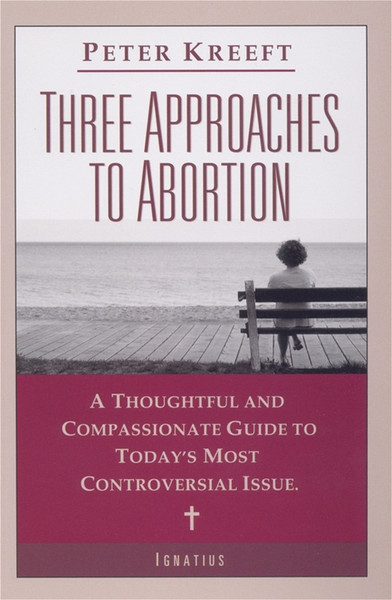 Three Approaches to Abortion will help you persuade others -including pro-choice Catholics - that abortion is an evil society cannot permit or tolerate.

Abortion has been and remains a crucial issue in American politics. Unfortunately, many Americans don't see abortion for the evil it is - the unjust killing of millions of human beings each year. Even many Catholics have been confused by the 'pro-choice' (read: pro-abortion) rhetoric of those who say that they personally accept Catholic teaching about abortion, but they can't impose it on others.

You've heard argument after argument about this topic. Maybe you think there is nothing more to say.

Three Approaches to Abortion, by popular author Peter Kreeft, cuts through the nonsense of the 'pro-choice' position. He shows in an irrefutable way why abortion is evil and why it's illogical to support abortion rights while claiming to be "personally opposed to abortion." Kreeft's commonsense approach to the issue, his lucid arguments, easy-to-grasp illustrations and examples, and his thoughtful dialogue between a pro-lifer and a 'pro-choicer' make this book an invaluable tool in the pro-life cause.

“What is left to be said about the abortion debate? First of all, that is it usually not much of a debate. Peter Kreeft points the way to taking deepest disagreements seriously in creating and sustaining honest debate.”
?Rev. Richard J. Neuhaus, Editor, First Things

“We all condemn the atrocities of September 11. Yet many Americans support legalized abortion, in which we execute every day more innocent human beings than were killed in the World Trade Center. Peter Kreeft, with his rare talent for explaining the obvious without patronizing or pretense, offers here a unique guide for inviting sincere persons to consider a basic truth ? that the law can never validly tolerate the execution of the innocent.”
?Charles E. Rice, University of Notre Dame Law School

“Peter Kreeft’s book argues for the humanity of unborn human beings and their right not to be destroyed. Kreeft practices philosophy the way a skilled brain surgeon practices his own art, i.e., with care, caution, courage, cunning, capability, and conviction.”
?Donald De Marco, Author, The Heart of Virtue

Three Women and the Lord (Digital)