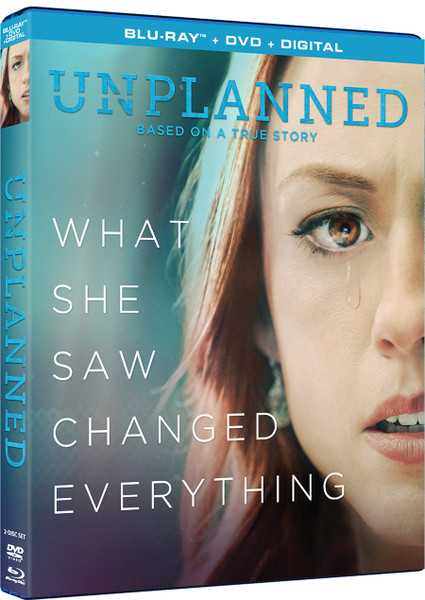 Based on the best-selling book and true story, this powerful movie speaks to one of the most polarizing issues of our time. It gives an eye-opening look inside the abortion industry through one woman's inspiring story of transformation.

All Abby Johnson ever wanted to do was help women. She believed in a woman's right to choose, and as one of the youngest Planned Parenthood clinic directors in the nation, she was involved in about 22,000 abortions. Until the day she saw something that changed everything, leading Abby to join her former enemies at 40 Days for Life, and become one of the most ardent pro-life advocates in America today. Starring Ashley Bratcher, Brooks Ryan, Robia Scott, Jared Lotz.

“Unplanned is not just a movie but an experience. The film is true to life and reveals the dynamics at work in the abortion industry and in the Pro-life movement. Don’t miss it!”
—Fr. Frank Pavone, National Director, Priests for Life

“If you only watch one movie this year, watch Unplanned. An incredibly beautiful film - I was in tears the whole time!”
—Lila Rose, Founder, Live Action

“For survivors of abortion and for those in pain because of abortion, Unplanned could be the first step in healing. This movie will be a game-changer for anyone on the fence about abortion.
—Melissa Ohden, Abortion survivor; Author, You Carried Me: A Daughter’s Memoir

“Unplanned 'goes there' like no other film--with love and compassion—proving that 'love is stronger than death.’ It is a victory for all who take a second look at what abortion really is. This is a win-win-win film! Truth wins. Forgiveness wins. Love wins."
—Sr. Helena Burns, fsp, Daughters of Saint Paul

"If you support abortion as a right or a choice, this is a must-see film. If you have had an abortion: trigger warning. Post-abortion healing advised. Women deserve better - including abortion workers. You can't unsee this."
—Serrin Foster, President, Feminists for Life of America

"The protection of the life of the unborn must be a priority for all of us. The movie, Unplanned, which I highly recommend, certainly underscores the power of our prayer and perseverance in this regard.”
—Most Reverend Gerald Barbarito, Archbishop, Diocese of Palm Beach, FL

“No movie had ever taken on abortion directly while showing that at the center of the abortion debate is hearts, minds, and souls. Unplanned will be the definitive movie on abortion, chemical abortion, and Planned Parenthood. There’s simply no movie like it and it will both stir, challenge, and change hearts on the most controversial issue of our time.”
—Shawn Carney, President and CEO, 40 Days for Life

“Unplanned is the most impactful movie I've ever seen. It brings to the forefront the crisis of abortion, and what it truly is, behind the closed doors of Planned Parenthood.  If you're wondering how to motivate others to do something about this issue, take them to see this movie. No one can walk away from this film without wanting to share the truth, help save women and children, and become an agent of cultural change for LIFE.”
—Lauren Muzyka, Executive Director, Sidewalk Advocates for Life