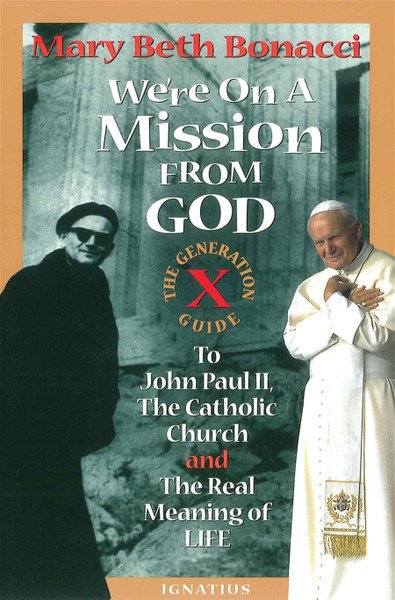 The generation of Catholics who have come of age since Vatican II is different in many respects from Catholics of their parents' generation. These younger Catholics have grown up in a world - and a Church - which has changed tremendously in a very short period of time. They were raised in a society which encouraged them to question what their parents accepted on faith. They were formed by a system of religious education which was in many ways struggling to keep up with rapid social change.

John Paul II is a pope for these times. He recognizes that today's young people have many questions. He sees emerging in them a deep and sincere faith struggling for definition and for support. In response, he has designated a special, bi-annual event - World Youth Day, where he comes to youth to bring the truth and the love of the Roman Catholic Church.

In this book, Mary Beth Bonacci joins with John Paul II in bringing young Catholics a clearer understanding of the Church and their role in it. She takes his quotes from the five World Youth Day events and "unpacks" them, explaining the truths of the faith clearly and concisely. This book is perfect for the Catholics of "Generation X" - and for Catholic "youth" of any age who wish to understand and to deepen their faith.

"Bonacci conveys the pope's message with excitement and verve. I wish I had this book as a teenager. Mary Beth speaks to teens with a rare openess and understanding."
-Karl Keating, Author, Catholicism & Fundamentalism

"A long overdue, down to earth but precise presentation of the truths of our Catholic Faith, not only for young people, but even for older folk who may have never been presented with the solid content of the Church's faith."
- Rev. Msgr. Michael Wrenn, Author, Catechisms and Controversies

God Is No Delusion (Digital)

The Mission of the Prophets (Digital)