Why Humanae Vitae Was Right 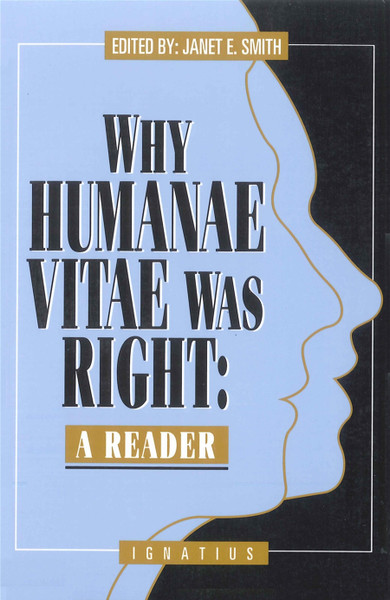 Why Humanae Vitae Was Right

For the 25th anniversary year of the historic document Humanae Vitae(1968), Janet Smith has gathered together twenty-one outstanding essays and articles by well-respected thinkers to provide the demonstration that Pope Paul VI was not simply correct, but prophetic. While this document is still widely neglected and misunderstood, the Church continues to proclaim that contraception is a moral evil and that the view of man, sexuality, and marriage that leads to the use of the Pill is not one that is compatible with human dignity, sexual responsibility and spousal love.

Many are unaware that there have been energetic and persuasive worth defenses of this teaching. The general reader, as well as the ethicist and moral theologian, will find much here to stimulate his thinking on this issue. Contributors include William May, Paul Quay, Elizabeth Anscombe, Dietrich von Hildebrand, Carlo Caffara, Cormac Burke, Ralph McInerny, John Kippley, John Finnis and Janet Smith.

"From the perspective of the 1960s, few but the Pope saw the dire future consequences of a distorted understanding of human sexuality which separates conjugal love from its life-giving dimension. This Humanae Vitae `reader' puts at our disposal for layperson, professional, or priest, twenty one significant essays in a series of well-reasoned defenses of the Catholic position."
Cardinal Anthony Bevilacqua, Archbishop of Philadelphia

"We now have more reason to believe than ever before that Humanae Vitae, the encyclical that many Catholics fought against, scoffed at, dissented from, and even left the Church over, is right. Janet Smith's scholarly compendium will provide ample evidence for the open-minded reader of Humanae Vitae's personalistic foundation, philosophical breadth, practical soundness, and prophetic inspiration."
Donald DeMarco, Author, Biotechnology and the Assault on Parenthood

"A superb collection of articles on every aspect of the encyclical and the issues that followed from it. This will be a major contribution to insuring that the whole question gets the attention it so crucially needs."
James Hitchcock, St. Louis University

Why Humanae Vitae Is Still Right

Why Humanae Vitae Was Right (Digital)

Why Humanae Vitae Was Right (Digital)

Why Humanae Vitae Is Still Right