Reclaiming the Fatherhood of the Priest 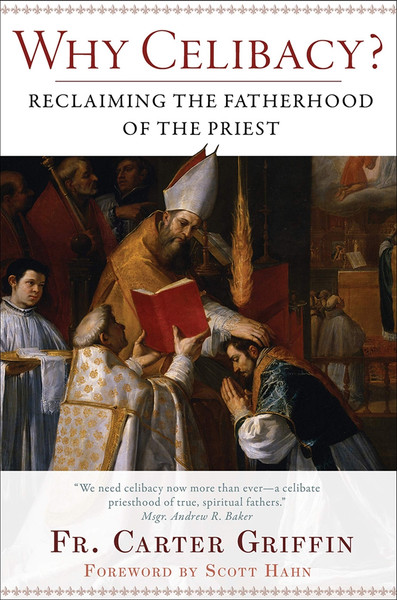 "The Church today demands a profound renewal of celibate priesthood and the fatherhood to which it is ordered."

Priestly celibacy, some say, is an outdated relic from another age. Others see it as a lonely way of life.

But as Fr. Carter Griffin argues in Why Celibacy?: Reclaiming the Fatherhood of the Priest, the ancient practice of celibacy, when lived well, helps a priest exercise his spiritual fatherhood joyfully and fruitfully. Along the way, Griffin explores:

In a critical moment for the Catholic priesthood, Fr. Griffin brings light and hope with a new perspective on the Church's perennial wisdom on celibacy.

"Celibacy is an often under-appreciated element in the fruitfulness of priestly ministry. I recommend this book to all who wish to understand and even reclaim celibacy as a precious gift entrusted to the Church…."
—Most Rev. Paul S. Coakley, Archbishop of Oklahoma City

"This book is so needed in the Church at this time. Seminarians who read this will be excited about the gift of celibacy, and priests will be renewed in their commitment!"
—Fr. Brett Brannen, Author and Pastor, Church of the Most Blessed Sacrament, Savannah, GA

"Griffin's careful study is an antidote to the impoverished understanding of the priesthood that is prevalent today. [Essential] reading for priests and those who form them."
—Dr. Mary Healy, Sacred Heart Major Seminary, Detroit, MI

"A thoughtful, trenchant, inspiring, and very timely defense of the ancient tradition of celibacy in the Latin-rite Catholic priesthood, written by one of America's finest priests."
—George Weigel, Distinguished Senior Fellow and William E. Simon Chair in Catholic Studies

"This book has the timing of a divine intervention. Just when fatherhood, natural and priestly, appears to be in tatters, this book arrives with healing and bracing truth!"
—Dcn. James Keating, Institute for Priestly Formation, Creighton University, Omaha, NE

"Fr. Carter Griffin has done a great service for the Church by restoring to the discussion of priestly celibacy the often-forgotten dimension of spiritual fatherhood."
—Fr. Paul Scalia, Episcopal Vicar for Clergy, Diocese of Arlington

"Why Celibacy? makes the case that priests do not renounce fatherhood but embrace celibacy as a privileged way of living it: generating life and fulfilling the fatherly responsibilities of providing for, guiding and teaching, and protecting those entrusted to their care."
—Sr. Sara Butler, M.S.B.T., University of St. Mary of the Lake, Mundelein, IL.

"The reform of the Church will not happen without the reform of the priesthood Fr. Griffin engagingly describes in the precious book you now hold in your hands."
—Fr. Roger J. Landry, Author of Plan of Life: Habits to Help You Grow Closer to God