A Catholic Critique of the Rapture and Today's Prophecy Preachers 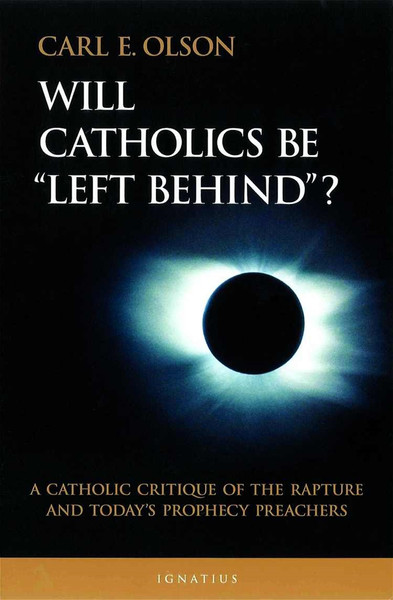 This powerful and timely book, written by a former Fundamentalist, is a thorough critique of the popular Fundamentalist notion of the "Rapture",the belief that Christians will be removed from earth prior to a time of Tribulation and the Second Coming. It examines the theological, historical, and Biblical basis for "premillennial dispensationalism", the belief system based around the Rapture, and popularized in the best-selling Left Behind books and taught by "Bible prophecy" writers Tim LaHaye, Hal Lindsey, Jack Van Impe, and many others.

Written for both the lay person and the serious student, this book combines an engaging, popular approach with detailed footnotes and exhaustive research. Beginning with the big picture, it focuses first on key concepts such as eschatology, the Parousia, and the relationship between the Kingdom and the Church. It then examines the Book of Revelation, providing insights into the nature and purpose of that difficult, final book of the Bible. Another chapter looks at the concept of the "millennium" and how it has been understood by various Christians over the centuries. Olson then shows how Left Behind creator LaHayeಙs many works on "Bible prophecy" are filled with attacks on Catholicism, and often rely on sensationalism, shaky scholarship, and subjective interpretations of Scripture

Olson, a former dispensationalist who now edits Envoy magazine, also presents a history of apocalyptic belief and theology, beginning with the Early Church Fathers and including the Montanists, St. Augustine, Joachim of Fiore, the Protestant Reformers, and the American Puritans. He shows how John Nelson Darby, an ex-Anglican priest, developed the premillennial dispensationalist system, which hinges on the Rapture, in the 1830s and how Darby relied upon faulty assumptions about Jesus Christ, the Church, and the Bible.

The second part of the book, "A Catholic Critique of Dispensationalism", focuses on three important topics: the relationship between Israel, the Church, and the Kingdom; the interpretation of Scripture; and the nature of the Rapture event. Filled with a wealth of information drawn from both Protestant and Catholic sources, this section provides a complete rebuttal to the premillennial dispensationalist system and the "left behind" theology. The book concludes with a reflection on the Catholic understanding of the end times, salvation history, and the final judgement. Glossaries of key persons and terms are also included.

A strong, but fair, critique of a dangerous and popular belief, Will Catholics Be "Left Behind"? provides Catholics and Protestants, lay people and clergy, and students and scholars with important answers and information about the roots and meaning of the "Rapture".

"Millions of Americans believe the Lord will snatch them up any day now, leaving the rest of us to the horrors of a seven-year tribulation. The hitch is that the 'Rapture' has no pedigree. As Carl Olson shows, no Catholic or Protestant believed in it prior to the nineteenth century. It is an authentic Fundamentalist 'invention'."
Karl Keating, Author, Catholicism and Fundamentalism

"In this extraordinary book, Carl Olson uses a surgeonಙs scalpel to cut through the mass of confusion that dominates contemporary reflection on the Last Things. Achieving far more than a refutation of millennialist errors and other disordered apocalyptic theories, he illumines the Church's majestic vision of time and eternity and demonstrates that Jesus Christ is the Lord of History and its end."
Michael O'Brien, Author, Father Elijah