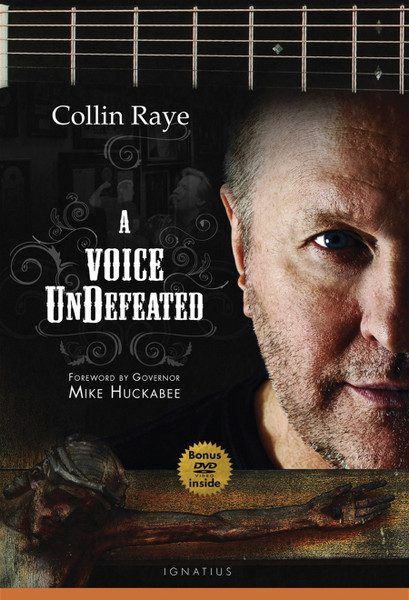 This eBook includes a bonus epilogue featuring heartwarming and inspirational stories of Collin Raye and his encounters with other celebrities around the world over the years of his musical career.

When Collin Raye's powerful, golden voice dazzled the country music scene in 1991 with his Number One hit single "Love, Me", country music listeners fell in love with one of the great voices of our time. A new star was rising, and Collin's success continued throughout the nineties with over eight million records sold.

Raye's autobiography, A Voice Undefeated, gives readers a down-to-earth account of the author's personal and professional life. From his childhood in Arkansas and Texas through his days with the Wray Brothers Band in Oregon and Reno to his rise to international stardom, this book is both a journey to the top of the music world and an intimate diary of a soul that has suffered great professional and personal losses.

Many who love Collin Raye, the successful country music artist, don't know much about Collin Raye, the man, and the many trials he has endured with faith and courage. Most recently his beloved nine-year-old granddaughter, Haley, died in 2010 from an undiagnosed neurological disease. Since Haley's death, Collin has become an advocate for the sick and disabled and has established the Haley Bell Blesséd Chair Foundation to provide wheelchairs to families with special needs children.

This is a remarkable, inspirational story told by the man who lived it. It is a story of faith, of struggle, of suffering, of profound love, and ultimately of triumph in the midst of tragedy.

"It was no coincidence that Collin Raye's signature piece of music was ‘Love, me'. His belief that an artist's real success was in the quality and artistry of his work made him a good showman. The love he discovered in his faith in God and his conversion made him a great man. His book, in his honesty and drive for real perfection, is a story written in mystical sensitivity. It is beautiful to discover how this boy from seedy bars, fairs and casinos, southern rock and jazz, became a voice undefeated for Christ."
- Mother Dolores Hart, Author, The Ear of the Heart

p>"With talent, drive, and hard work, Collin Raye reached the top of his game and was even once called the ‘star quarterback' of country music. His heartfelt story of perseverance and ongoing conversion is sure to encourage anyone striving to live by faith in a secular world."
- Marcus Grodi, EWTN Host, The Journey Home p>"The sharp shadow of suffering has fallen across the life of Collin Raye in ways that would have felled lesser men. But, as the Bowie County hit-maker knows well, even the shadows are nothing without the Light. Through the astounding musical gift that earned him five Grammy nominations (and counting), Raye has a rare knack for transforming all that suffering into an experience of indescribable consolation. He's all about stories, and those told here are too unlikely to be fiction! Whatever your taste in music, A Voice Undefeated is part spiritual confession, part show biz memoir, and part rich slice of Americana."
- Patrick Coffin, Radio Host, Catholic Answers

"Like the biblical Psalmist who sang God's praises at time of exhilarating joy and devastating sadness, Collin Raye, gifted with a compelling faith and rich talent, carries the reader of his autobiography through life experiences of "indescribable joy" and "heart dissolving pain". Never doubting that God's guiding hand was upon him at every moment, Collin's struggle to integrate his faith into the whole of life is both inspiring and challenging to fathers, husbands and everyone who, despite our own brokenness, strives to be a witness to Jesus at home, at work and wherever we are. The guiding truth of Collin Raye's life story is well described in I John 4: 16: 'We have come to know and believe in the love God has for us.' "
- Most Rev. Ronald Gainer, Bishop of Lexington, Kentucky

p>"A must-read book to meet the real Collin Raye, a fascinating bundle of seeming contradictions. He was raised in the Christianity of the Bible Belt, but was drawn to the Catholic Church. He dreamed of being a rock star, but became a top-of-the-charts country western singer. He sought fame and fortune, but valued nothing more highly than being a father and making the kind of music that lightens the load of others. "
- Raymond Arroyo, EWTN Host, The World Over, New York Times Bestselling Author p>"The most authentic voices for life are often those of people who can draw from their own experiences. Collin Raye has such a voice."
- Abby Johnson, Author, Unplanned

"If there were ever a book to show modern day believers that in the end nothing matters but faith and family, then Collin's book is it. Despite becoming a country music superstar, Collin is breathtakingly truthful and transparent about how fleeting fame and fortune can really be. His fans will find his roller-coaster journey to the top of the charts fascinating but it is his walk with the Lord and into the Catholic church that is truly compelling, heartwarming, and challenging all at the same time. Collin illustrates how the Church's teaching on suffering and end of life issues carried him through some of the darkest times. Readers will also get the real scoop on the music industry and learn why Nashville has in many ways gone the way of the culture; losing its soul for the sake of profit. A Voice Undefeatedis simply a great read all around offering valuable lessons no matter where a person is faith wise."
- Teresa Tomeo, Motivational Speaker, Be p>"A treasury of information about a fascinating man who has captured many hearts with his music and charisma. Collin's story is heartrending and heartwarming . . . a witness of how the goodness of God can work miracles in anyone's life."
- Governor Mike Huckabee

"Powerful stuff! Collin Raye has faced it all, in life and in the oftentimes treacherous music business. Collin uses every setback to generate a step forward to a new level of his life and career. Read his story and learn from one of the strongest souls you'll ever meet."
- Lorianne Crook & Charlie Chase, Radio Hosts, The Crook & Chase Countdown

p>"Collin Raye has always stood up for causes that are near to his heart. A Voice Undefeated gives us a glimpse into his personal family life and heartaches, his music career, and his profound love of music. His analysis of today's music culture and his courageous challenge to Nashville to recapture the legacy of its roots is a stark reminder of the gift we all inherited from the great legends of Country music."
- Bobby Roberts CEO, The Bobby Roberts Company, Inc