An Initimate Portrait of the Pope and His Household 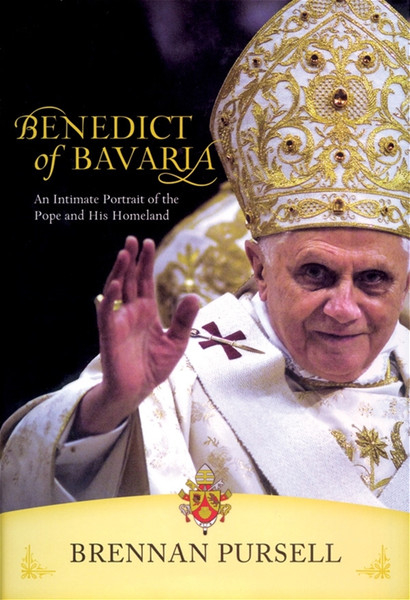 Brennan Pursell, author of the newly released book Benedict of Bavaria hopes to share the intimate side of Pope Benedict XVI with the world and give readers a glimpse at the true nature of the man—how his mind works, what his heart loves, and where his loyalties lie. Unlike other books about Cardinal Ratzinger/Pope Benedict, Pursell shows that like his Catholic faith, Benedict's Bavarian heritage is an inextricable part of who he is.

"A fascinating narrative, rich in delightful descriptions that blends history, psychology, pilgrimage, and a bit of tourism in beautiful Bavaria. Insightful descriptions of the Pope's personality counterbalance the media image of the Panzer-Cardinal. The portrayal that emerges is that of a benevolent, humble, and determined man engaged in the pursuit of an ideal that ultimately led him to the throne of Peter. A book to stand side by side with The Ratzinger Report."
—Raymond de Souza, International Catholic apologist, director of Saint Gabriel Communications.

"Pursell's intimate knowledge of Bavaria lends itself beautifully to this straightforward and easy to read biography of Pope Benedict. If you want to go beyond the headlines and the talking heads to know the real Benedict, this is the place to start."
—Dr. Pia de Solenni, Moral Theologian and Cultural Commentator

"Brennan Pursell is a rare find: he combines intellectual rigor with lively enjoyable prose, and a mature love for the Church with a keen and respectful understanding of contemporary culture's most pressing issues. If you read one book on Pope Benedict XVI, this is the one to pick."
—Father John Bartunek, LC, best-selling author of Inside the Passion and The Better Part

"In this very readable book, Brennan Pursell has given all those interested in getting to know the real Pope Benedict the means to understand him from the inside. Pursell ably connects the formative seeds of Joseph Ratzinger's upbringing-his family, his deeply Catholic Bavarian culture, his teachers, as well as his up-close encounter with the evil of Nazism-to the abundant fruit he has borne as a theologian, bishop, Vatican prefect, and pope. This book will nourish both those who know a lot about Pope Benedict and those who know almost nothing."
—Father Roger Landry, Executive Editor of The Anchor

Sample images from Benedict of Bavaria